A group of artists from Amsterdam told me about their plan to take part in the international symposium in Bohemia. Most of them visited the site and met the other artists and organizers. Their encounters were initially framed by the topic of ecology, but they gradually moved to a more or less conceptual framework, as ecology actually contains every aspect of the world surrounding us. Even to the extent that the term "world" is created by human presence and by human behavior. So it was natural that the artists concentrated mainly on the artistic and aesthetic aspects of the project.

According to my ideal idea, the symposium should meet these intentions, but at the same time surpass them, to go beyond. As far as I am concerned, there should not be controversy between nature and culture, between East and West, between essential and accidental, male and female, because each duality is (as) a direction. Let’s try to get rid of the questions about the nest and to focus on another subject — flying. There will be works of art determined by matter and expression. Reflections will exist, knowingly supported by definitions, if they are placed in the context of direct experience.

Ron Miltenburg (b. 1951, Rotterdam) studied Eastern philosophy in India, Switzerland, and the US, and has studied art history in Amsterdam. He has conducted research on various paradigms of metonymies and metaphors. He is a freelance publicist, curator, television and video producer. He has exhibited in the US and the Netherlands. 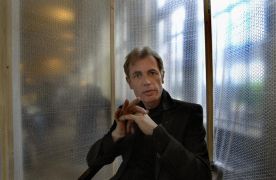