Sjoerd Buisman: Phyllotaxis I. and II.

"One should seek only nothing behind the phenomena, for they are themselves the teaching."
Johann Wolgang von Goethe

Postscirptum: phyllotaxy is the arrangement of leaves on an axis or stem.
Sjoerd Buisman, 1993

Sjoerd Buisman (born 1948 in Gorinchem, The Netherlands) is a Dutch visual artist who lives and works in Haarlem and in La Ferrière-Duval, Normandy, France. Studied at the Academy of Visual Art in Rotterdam (1965-1967) and Ateliers ’63 in Haarlem (1968-1970).  In 1969 he visited nad was inspired by the exhibition in the Stedelijk Museum - Op Losse Schroeven: Situaties and Cryptostructuren, which was produced by Wim Beeren. Beeren highlighted many new directions artists were curently exploring, from Land art to Arte Povera, from Conceptual art to Post-Minimal art. There were works by Giovanni Anselmo, Joseph Beuys, Marinus Boezem, Wim Crouwel, Jan Dibbets, Ger van Elk, Douglas Huebler, Joseph Kosuth, Jannis Kounellis, Richard Long, Mario Merz, Robert Morris, Bruce Nauman, Dennis Oppenheim, Robert Ryman, Lawrence Weiner and Gilberto Zorio. Buisman became fascinated by rural growth and flowering of plants and trees. As a child, he went out exploring nature in the river area around Gorinchem. In his works, he uses living plants and trees that he subjects to experiments and subsequently observes in order to discover which laws underlie their growth processes. He would hang a plant upside-down, for example, to see the leaves grow upward after a certain period or tie a knot in a young willow tree and record how the tree developed in the course of time in spite of, or thanks to, the unnatural operation. Later on, he went on to carry out large-scale projects such as a beech palisade consisting of 250 beech trees and a 50-metre high pine wall, both planted in the National Park de Hoge Veluwe in 1985. The trees were pushed into a form within a wooden frame to further develop from there. 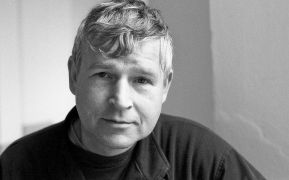