Stefan Pfaff Hösch arrived at Plasy without a pre-prepared plan or concept. After he researched the monastery premises, he decided not to produce and install any physical objects. Instead, after consulting the keeper of the monastery, he proposed to clean up the ground and wooden first floor of the former summer refectory which Chancellor Metternich had rebuilt as agranary.

In recent decades, the granary/refectory hall served as a place to store materials and rubbish. The intensive physical and symbolical gesture of cleaning the ground floor and the first floor exposed the wooden structures of the refectory. Stefan included a rope railing which separated the “public” and “exhibition” zones, similar to guided tours for tourists in historical buildings.

Stefan Pfaff Hösch (1959) is German visual artist, he studied at Staatliche Kunstakademie in Düsseldorf, class of Prof. Magdalena Jetelová. He works in the field of conceptual fine arts and new media. He lives and works in Aachen. 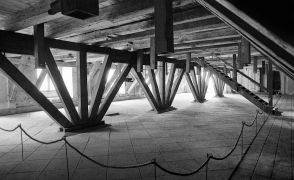 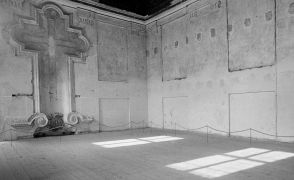 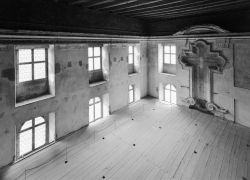