Much of the landscape is strewn with artifacts of linearity. Inscriptions of human transmission coded and uncoded demarcate borders, electro-materialist dependency and radio-teleological communication systems. Points may be connected via visible lines of wires or arrays of invisible signals transmitted via techno-telepathic networks. Physical in every aspect, these artifacts expose the parallel worlds of modernity yet remain isolated from their surroundings, standing out as sculptural figures traversing the open land. As structures unto themselves, they can be intrusive and out of place. Should obsolescence of their intended purpose set in by circumstances entirely unrelated to their location, they will either be left to weather, occupied by vegetation or recycled for their material value.

Resonant Geometry is a performative exploration in redefining geometric space through the phenomenon of resonant feedback. The framework of the project is based on a tempered or adjustable system intended for real-time performance using tensioned lengths of instrument wires that act as both real and metaphorical lines that define space. The dimensions of this space will be measured by the sonic responsiveness of the signals in the system. In this way, not only does the installation itself function as an instrument bu becomes an extension of the space itself. The wires resonate when induced with direct signals to generate electronic tones resulting from the physical movement of the wires. What we hear, in a sense, is a auditory translation of a spatial dimension. Such an experiment, is based on a speculative reasoning, to “measure” the degree to which a space has an inherent "tuning" based on its geometric proportions. The point to point 2 dimensional lengths of wires can be extended, woven and cross-crossed in a 3 dimensional space adding complex layers of tonality, dissonance and harmonics to the auditory translation process. With multiple dimensions explored, emphasis will be given to the physicality that is most likely to define the acoustic properties of the space such as reflections and reverberations. The resulting sounds can be seen as an audible “translation” of architectonic space. There are many historical precedents in both the fields of geometry (architecture) and sound (tunings) from which Resonant Geometry draws inspiration.

Additionally, Grzinich has worked in experimental video since 2000, often in combination with his audio work. In 2010 he completed his first two film works, mimema and a treatise on sound and site-specific activity Sound Aspects of Material Elements, both of which were screened internationally and then published on DVD by the US label and/OAR (2012). He is continually attempting to rethink the cinematic format with an emphasis on the sonic experience, leading to a more living, animistic view of landscapes, objects, the built environment and those who interact with them. Since 2003 an event and project coordinator at MoKS, an artist-run international residency center and project space in southeast Estonia. 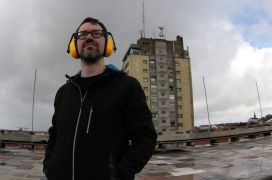