The musical theater performance was inspired by the Italian Diary, written by J.W. von Goethe during his journey to Rome in 1786. Wenting and Rickels constructed several odd Baroque sound instruments, recalling the experiments in sound of the Italian Futurists at the beginning of the 20th century.

Victor Wentink (born 1948, Enschede) is a Dutch composer and theorist. He is known as a pioneer in electronic and electro-instrumentical music, but also worked in theaterworks, music-machines and technological projects. In 1966 he started to study piano and electronic composition with Dick Raaijmakers at the Koninklijk Conservatorium. Since 1973, he has followed the multimedia class at the Vrie Academie in Den Haag. In 2006, he received a Master degree for his thesis on "Art and Science".

In 1969 together with Dick Raaijmakers and Gilius van Begeik founded the electro-instrumental ensemble ‘Het Leven.’ He also taught electro-instrumental music at the Koninlijke Conservatorium (1973-1974) and electronic composition at the Brabants Conservatorium (1972-1977). Between 1971 and 1982, he worked at the Steim (Stichting Elektro-Instrumentale Muziek) in Amsterdam, where he constructed the composing machine - Eemnes Machine (1975–1979) - which was exhibited at the Tektonik exhibition in the "Haags Gemeentemuseum" (1979). 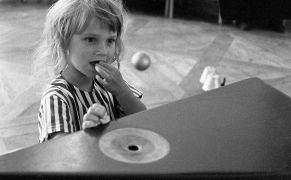