"I placed in the convent several unstable formations composed from industrial glass: high above the yard of the convent was suspended a glass object, barely visible against the sky. The object was attached to the string in such a way that it could, driven by wind, move from place to place. The wooden object was carved out in such a way that the thin bottom was almost transparent. In collaboration with Dian Booth, I made in the corridors of the convent a performance with water drawings on floor."

Alexander Fischer (born 1957 in Switzerland) is a visual artist, living and working in Bern. He studied at the Art Academy in Zurich, and spent several years in New York. My work between 1989 and 1992 was done in New York. From 1993 on he has been working in Switzerland, Since 2007 mostly working with plywood, acryl, gold-leaves on gesso on wood, paper and cardboard. 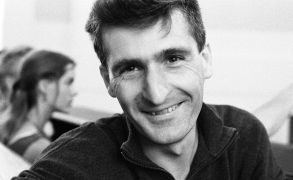