I was invited to stay and to work in Plasy by The Hermit Foundation. I came for two weeks in August 1999 from Oslo. In Prague I took a cab from the airport, with the driver Victor from Russia we talked all the way: about his son, about the mountains, about the landscape, about people on the road. About children, dirty children who annoyed Victor, bathing in the river by a bridge. Finally we arrived to the high walls of the monastery.

The time in Plasy was magic, full of the history embedded in the buildings: the overgrown garden, the half-destroyed half-renovated monastery. Miloš received me kindly in the yard of the Prelature, where the dormitories were. We had a cup of tea together and he explained practical things to me, and then he had to leave for his projects in Praha. I found a large wooden bed in the large room. There, in the “nuns dormitory,” as we called it, those who “squatted” in it, organized their things in piles next to the beds, and dreamt and slept: Mercedes, Marie-Ange from Buenos Aires and New York, Rosa from Barcelona, Kaeko from Tokyo and Marseille, Monika and other artists, who came from all over the world. I dont remember them all, Petr from Praha, Adrian Fisher from London, and others, who just visited.

The male artists, like monks, had their own rooms, but we - the nuns - lived in one huge room. Falling asleep with all the dark wooden beds like boats a few meters from each other, between white walls and under the high ceiling, it was like travel through time.

Outside on the yard we picked parsley which grew wild on the steep sides up to the monastery walls. We cooked together, a lively gang of artists. Our common meals were full of discussions, serious or joyful, and then we went to sleep and fell asleep or couldn´t sleep and stayed awake all night. We bought fish one afternoon by the river. Two local boys came with a big fish: “Can we eat that?” “Oh, yes!” they answered, with a laugh. So we had vegetarian soup and fish one night. No one but me dared to prepare the fish, that was very strange I thought.

We went down to the little town, and by the pub we bought beer for our meal. We brought a bucket and they opened the window and used that as counter. Fresh beer for our meal, we filled jugs with it and put it on the long table in the kitchen.

There were rooms filled with lost furniture, books, a video player/TV, and Miloš the alchemist in his room, covered with things and texts and information. Miloš himself came and anwered our questions and problems and helped out, sitting in the shadow of the Hermit office. In this room was the only telephone, I think. I still don’t know where this room was located in the monastery.

I was told in one evening, when the summer nights were mild and warm and darkness fell, that there were ghosts in part of the building, on the other side where we slept and where was the kitchen. There was a door and stairs were you did not go in the night. I don’t think it was evil, but there were strange things over there.

Under the Prelature yard were old underground walls, where during the communist times, a nuclear shelter was constructed. I thought it it was strange that they built – for important people - for themselves – the shelter in the remains of an old monastery, filled with history, thoughts and silence.

The second day I walked around. The buildings were worn out, or had been partly destroyed, on others a new time had began to leave traces; they were renovated, but sterile and closed. There was huge barn with two or three floors, with old wooden floors, were the sunlight fell through and in the middle was a belltower with fantastic construction between two wings of the barn. Under the barn there were wide vaults with big arches, cellars and caves of wet stone, cold and damp floors.

There was an event organized by the Hermit Foundation and Miloš the second week, I think. Every corner of the monastery was filled with site specific interventions, performances, film, music and actions.

I found the octagonal room in the gardenhouse of the Prelature, where I could work with sound and voice. The ceiling was high, the floor covered with sand and sticky from the asphalt remnants from the time when it was used as as kitchen or something. On the old walls, generations of electric cables sticking out, and the windows were full of dead insects.

I brought some sound material which I had prepared at home, things to draw, tools, nylon string, some texts. The rest I wanted to make or collect in Plasy. I asked Miloš if I could use the octagonal room to work in, and he asked the keepers and agreed.

So I started by sweeping the floor. I stared to vocalize every early morning. I began to collect local items from the little local daily life and did some shopping in the town. I started to collect things that were left and disposed of in corners under the stairs, in abandoned rooms, in closed areas, all over the place I could find things.

I found out that pickled cucumbers and other vegetables were part of the local culture. So I found three, four big glass jars in the monastery to use them for making "Plasy pickles" At the same time I worked with texts, vocals, the room, materials. I found a chair in the garden one day, it stood out there in rain and wind. I took it into the room, suspended it from the ceiling in the middle. I fastened the chair with nylon string with all the electric wires left behind. The chair was levitating a bit above floor. The sunlight moved into the room, over the swept floor and over the chair.

I made a live performance – Plasy Pickles – on the last day, when people were invited into the installations. I made one new jar of Plasy pickles, with pickled vocal, texts, local materials, such as honey, lemonade, rusty items I found, plastic things. People helped out. In the back room – a kind of side room – I placed small table. I had scrubbed and cleaned it. During the previous weeks I filled three glass jars with items and liquid, and then placed them on the table. The colours and thickness and unevenness of the materials and liquids were fine. This was “The Plasy pickled.”

Ewa Jacobsson is a visual artist and composer. She has been sound collecting since the early 80s. She also collects visual castaway elements from actual sites, and uses materials such as marzipan, oil, steel, wire, photographs, drawings. Her work includes site-specific installations with visuals, sound and preparation of spaces, pure sound composition, physical sounding objects and live performance at exhibitions, museums, concert spaces and in other contexts, including works for public spaces or participatory works. Advanced techniques and materials combined with the low-tech is a reflection of her interest in the transmission of importance and meaning, existentially or politically, through different media, ignoring the hierarchies commonly used. 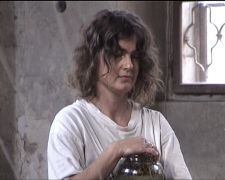