1. concert for sticks and hay
2. How to insinuate into flavour of a fat woman / a lecture
St. Benedict chapel

Maybe it is not about music at all. Perhaps this is because I don´t even know precisely what this word really means. When I will find out what it really is, I will give up. Sometimes there is even something to hear (but its not essential) and sometimes there is even something to see (and that's not essential either). This gives the impression that one can call it a concert.

I do not even remember if we used a long or short "a" in the name of the group. It could be because of the wooden cracked barrel in my studio, Milan Magni, Petr Kvíčala and me. For some unknown reason - towards the end of the Communist era - we gathered around this cracked barrel in my studio in Rousinov, and somebody from us suggested that we could set up a music band, since we had this barrel already there. And there was written on it "Florián". But we never used the barrel, because it was drowsy and somewhat falling apart. We also didn't used any musical instruments because we did not want to waste time to rehearse. We even forbade ourselves to rehearse, because we were afraid to learn something and then to forget it. Only hay, sticks and stones were considered. After we played for about an hour, we decided that this was possible, and then we just went touring. I remember some events, like a stack of hay in Prague, or that we performed with a living carp in Bratislava, in such a way that Magni pulled the carp from a bucket of water, then he put his head in a bucket and choked for the same time, to avert the criticism from animal rights activists. Or at the Art House in Brno, we performed with living horse and we were reading the western "In the Sign of the Snake" (J.Jiráň, M. Palla) with a living snake. Or we also red Winnie-the-Pooh at Hermit in Plasy, accompanied by a white goat. To summarize the importance of the Florian group I had to think: the Florián group always despised the audience and dealt only with itself, just as it should be in the arts. And this is why people do not yet know about us and will not know about us, and I am quite proud of that.

Florian practised a specific kind of minimal take on music, performances and events. They usually used simple, natural materials and employed quiet sounds. Core members were Marian Palla, Petr Kvíčala, Milan Magni.  Marian Palla (born 1953) studied at the Brno Conservatory and played double-bass in the Janáček Opera House in Brno for over 15 years. At the same time, he delved in conceptual work that works with media traditionally associated with the fine arts (drawing, painting, object, performance) and with music and literature. His work has been exhibited in the Czech Republic and abroad, and his works are represented in major galleries in the Czech Republic. From 1994 until 2011, he taught as assistant professor at the Faculty of Fine Arts of the Brno University of Technology. He published eleven books. His work is based on the best tradition of black humour, Dada and the nonsense-style poetry. Marian Palla, one of the key figures in an artistic generation that has had great significance in the cultural life of the South Moravian metropolis of Brno. He is now retired, lives and works in Střelice u Brna.

Petr Kvíčala (born 1960, Svitavy) is a Czech painter. Since the mid-1980s he has been experimenting with ornament. A basic element of his creative language is ornamental lines, most often waves, broken lines or loops. He combines, reproduces, melds and layers them in various ways. His inspiration for this abstract and radically reduced language can be found in the landscape, through which Kvíčala, somewhere around 1985, realised the autonomous expressive possibilities of geometrical linear elements, rhythmically repeated on the image's surface. At that time, Kvíčala's work was characterized by a free intertwining of different disciplines: creating texts inspired by experiences in the landscape and drawing simple sketches of fields. At the same time, he worked in several groups that dealt with minimal and specific music, whose production was on the brink of theater performances and animated sculpture installations. 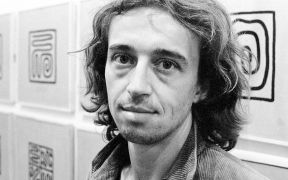 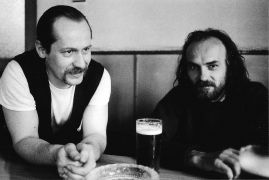 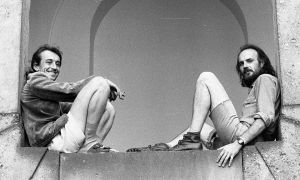 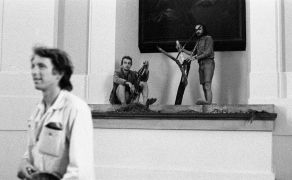 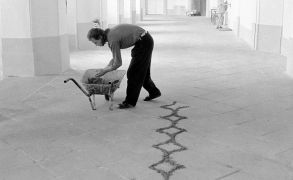