"To break the language in order to touch life is to make, or remake theatre;
and the important fact is not to believe that this act must remain holy or private.
But it is important to believe that not anyone can do it, and that preparation is needed.

This brings me to reject the habitual limitations and powers of man, and to render infinite the frontier of what is called reality.

One must believe in the essence of life renewed by the theatre, where the undaunted man makes himself master of that which does not yet exist, and he brings is to life.

And everything that does not exist cannot yet be born, so long as we are not satisfied to live with simple recording instruments.

As well, when we pronounce the word of life, we must understand that it´s not a question of life recognized by the outside appearance of facts, but of this sort of fragile and moving home which forms do not touch.

And if there is still something infernal and truly evil in these times, it is to linger artistically on forms, rather than like the torture victims who are burned and who make signs at the stake."

Hilary Vexil was the group coming out from the artistic comunity which lived and worked in the Graan Silo in Amsterdam. "The "Graan-Silo" (or rather ‘Silos’: two joined buildings for cleaning, drying, storing, and pumping grain to and from ships and wagons) is one of the most noticeable features of Amsterdam. It marks like a great gate-castle the western entry of the wide sweep of Het Ij water across the northern boundary of the inner city.

Henriette Reesema is a dancer, performer, choreographer, physical theater actress, cabaret artist and clown. Worked in England, Spain and Netherlands in dance, improvisation and object theater  companies. Performs several solo and duo cabaret acts. She uses her body to speak any language.  Now living in France and running the Art center Madonarts. In her role as Zazi, she makes regular disappearances with the  Zigliani family.

The “Silo” community is the most fabulous of a new wave (late 1980s 1990s) of large-scale squats. Motivated less by politics or a need for work-spaces than the powerful childhood promise of forming one's own home in a locked castle away from the gaze of the alter-ego of mass mores and taste; in a place of marvels that inspires and provides means for invention… actualising dreams, not as art installations, but to an extent that is tested by living in them. 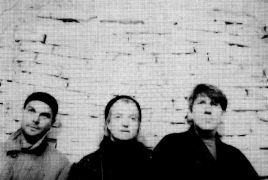