Jagdish Chander: The Path to Nirvana

Jagdish created for the symposium an installation with twenty one black wooden discs with white symbol of a flower emblazoned upon them. He was delegated from the Sanskriti Foundation New Delhi, where Irena and Vojta Havlovi had later gone on their artist residency.

Jagdish Chander (born 1954) is an Indian visual artist, mostly engaged in painting. He received his degree in Painting from Delhi College of Art, University of Delhi. Jagdish has been concerned with the portrayal of ‘pure emotion’. For this he has employed the most direct form - the human face contorted into expressions portraying anger, bewilderment, happiness and triumph. However, mature rational consciousness achieved through thought, education and experience is not easily escaped, and a spontaneous expression of feeling doesn’t naturally translate into a re-awakened world of free, untainted existence. In this light, it would be more productive to recognize how Jagdish’s art reflects a desire to restore a balance between thought and feeling. Where much of contemporary mental life is pre-packaged, repetitiously and deadeningly familiar, and our attention is constantly hailed by a cacophony of voices telling us what and how to think, it is useful to imagine an approach to rationality that includes emotion and intuition. In these paintings, conflicting feelings emerge and become readable as anxiety, rage, despair, numbness, frustrated attempts to be heroic, and fragmented efforts to maintain at least some kind of recognizable human dignity amidst the pressures of the everyday. Jagdish’s men, for the most part, emerge victorious. 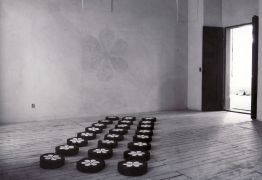 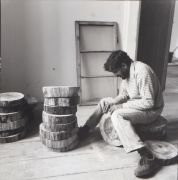