Santini Aichel (1677 – 1723) was born as the oldest son to a respectable family of a Prague stonemasons Santini Aichel (his grandfather Antonio Aichel moved from Italy to Prague in the 1630s) and was baptized in the St. Vitus Cathedral as Johann Blasius Aichel. He was born with a physical disability – paralysis of half of his body. This prevented him from a successful follow-up to his father's career. He only served his time of apprenticeship (as did his brother Franz), but he also studied painting from the imperial and royal painter Christian Schroder.

Around 1696 he started to travel and gain experience. After his journey through Austria, he arrived in Rome, Italy, where he had the possibility to meet with the work of a radical architect, Francesco Borromini. Borromini's influence is apparent in his predilection for star-shaped forms and complex symbolism. Many of his buildings are airy and elegant, yet he was considered a maverick genius by his contemporaries and exerted little influence on subsequent generations of Bohemian architects. It was in Italy where Santini incorporated into his name his father's name, Santini.

In 1700 Santini started to design independently and to build, which ensured his own income. He then became a member of one craft guild and founded his own construction company.

Santini married Schroder's daughter (Veronica Elisabeth) in 1707. They had four children, but all three sons died from tuberculosis at an early age; the only child left was Anna Veronika (born 1713). Santini's wife died seven years later and he remarried a South Bohemian noblewoman, Antonie Ignatie Chrapická from Mohlišovice whereby Santini was ennobled. Daughter Jana Ludmila and son Jan Ignác Rochus were born from this marriage.

Santini acquired the style of J. B. Mathey and after his death also finished several works of his. In 1705, he bought Valkounský house (no. 211) in Nerudova street for 3000 gold coins in cash and rebuilt it. Santini became a well-known person, but he unfortunately died at the fairly young age of 47 and some of his works therefore remained unfinished.

The asteroid 37699 Santini-Aichl is named in his honour. 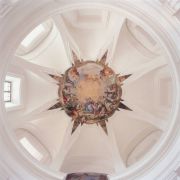