Jan Merta (born 1952 in Šumperk) was born into a family of an Evangelical priest who emphasized the study of the Bible. He spent his early days in Liberec and then moved with his parents to Prague. There, in 1972, Jan Merta graduated from the  art school of Václav Hollar. At the Academy, he was admitted ten years later and graduated in 1987. More than by the school, he was influenced by his younger classmates (Petr Nikl, Antonín Střížek or Tomáš Císařovský).

Jan Merta is one of the most important Czech painters of the generation who burst on the art scene in the 1980s. His painting is characterized by personal motifs based on the stories and experiences of the people he met. These are the memories and reminiscences of places and events long past, which he reworks in his mind.

On the one hand, his works are almost abstract paintings with pale tones with a touch of mystery and, on the other, are realistic scenes from garden colonies or slums, often rendered in distinctive colors. In the mid-1980s, he exhibited objects that were meant to preserve some content (containers, boxes, baskets, cups). In the mid-1990s he dealt with light and his influence on objects and figures. He often returned to his childhood in Liberec.

Sculptures constitutes another node for his work. In addition to the surface work of painting, he also takes to the third dimension when he needs to express his idea as a material object. He often sculpts wood. 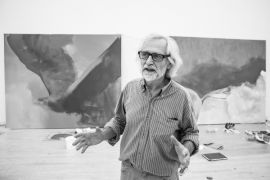