Fungus, similar to the fungi which grow densely on the Fungus Rock in Malta, emphasizes the moment of intercourse with their environment. That means “Fungus” is searching for a base, for the possibility of some kind of rooting and, together with Ram Dass, a certain sacredness of all activities. It is simply the understandig of the agency of acting within the wider whole. Hence, the slow preparation of this event. It is an elementary ecology, not an ecology in the sense of an arbitrarily defined concept of contemporary social discourse that would create the content or theme of a particular artist’s work. This elementary ecology manifests itself in a complex approach towards life as a whole. This applies foremost to the Fungus concept itself, because it is not an event that is primarily focused on the creation of artifacts and their presentation, but rather on exploring the terrain of shared interests perceived from different points of view. My original intention was to offer Fungus to young artists and students alike. I think that their feeling, their understanding of ecological issues, could be important to us.

In Bohemia, there is a tradition of a contemplative form of art (Josef Šíma, Václav Boštík), but what seems to be missing is such a type of work which would translate artistic thinking into tools of social communication. I mean, for example, the “conversational drift” of the Harrisons — the clear articulation of the concept and its openness and, actually, the resulting profound communication. It turns out not only to the need of art itself, but also to our globally devastated environment, including ourselves. The fact that we eventually agreed on the participation of Šejn, Ambrůz and Vímr was naturally due to the quality of their work. Consistent with its designation, Fungus should disrupt the stereotypes of the structures of our rational purpose, and open up possibilities for other, less self-centered approaches towards the world.

Jiří Zemánek, PhDr. is an art historian, ethnographer, curator, translator and journalist. His interests include the overlaps between artistic creation, ecology and spirituality, paradigm shifts and the emergence of a new integral culture. He is translator and editor in the fields of deep ecology, geomancy, integral culture and neo-cosmology. He is an associate of the Prostor arts review and initiator of The Pilgrim Association. 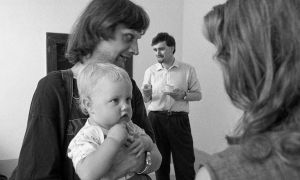