"Three phases of the candle:
1. the candle stays on top of the light
2. the candle balances with the light
3. the light absorbs the candle
The Candle is a symbol of contemplation and intimacy, reminding us of the spiritual life of those who lived and found their mission here."

Jitka Svobodová (born 1941) studied at the Academy of Fine Arts in Prague, where she graduated in 1967 from a painting studio and in 1976 from a restoration studio. In the years 1991 – 2012, she worked there as a professor of the drawing studio. After her early painting stage, from the 1970s on she devoted herself to drawing. Her work was inspired by common objects of everyday life, such as ladders, planks, curled wires, bulbs. Jitka Svobodová's drawings were flat, without the traditional concept of a linear perspective. The appearance of objects has been reduced to minimal display without emotion and expression.
An important part her creation is spatial objects. They have appeared since 1974 and accompany the author's drawing work. They are subtle works made of not very durable, fragile materials - Jitka Svobodová covers the fine wire skeleton with a thin layer of thin paper which is colored with bright colors.She says her objects are actually drawings in space, and the themes mostly relate to nature (ex. Tree in the Wind) or to day-to-day reality (ex. Shut  Window, Door). In the late 1970s and early 80s, she created objects which recorded ephemeral phenomena and natural events (a series of candles with flame, the Sun). Recently, these are particularly pure wire-cloud objects, made up of several wire lines.
Her style of capturing the everyday, even banal, objects is extremely minimalist. They are always drawings with reduced color or in monochrome. The subjects consist of a quiet, still, distant and metaphysical space. By the end of 2005, Svobodová returned to her previously studied topic: to the passing phenomena of nature, while her drawings show an attempt to capture smoke or clouds. 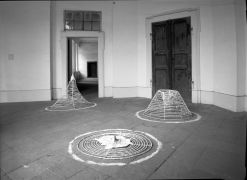 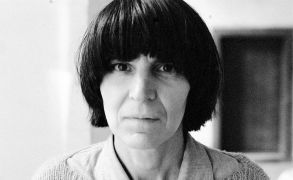