A Voyage to Laputa

"At my alighting, I was surrounded with a crowd of people, but those who stood nearest seemed to be of better quality. They beheld me with all the marks and circumstances of wonder; neither indeed was I much in their debt, having never till then seen a race of mortals so singular in their shapes, habits, and countenances. Their heads were all reclined, either to the right, or the left; one of their eyes turned inward, and the other directly up to the zenith. Their outward garments were adorned with the figures of suns, moons, and stars; interwoven with those of fiddles, flutes, harps, trumpets, guitars, harpsichords, and many other instruments of music, unknown to us in Europe. I observed, here and there, many in the habit of servants, with a blown bladder, fastened like a flail to the end of a stick, which they carried in their hands. In each bladder was a small quantity of dried peas, or little pebbles, as I was afterwards informed. With these bladders, they now and then flapped the mouths and ears of those who stood near them, of which practice I could not then conceive the meaning. It seems the minds of these people are so taken up with intense speculations, that they neither can speak, nor attend to the discourses of others, without being roused by some external taction upon the organs of speech and hearing; for which reason, those persons who are able to afford it always keep a flapper (the original is CLIMENOLE) in their family, as one of their domestics; nor ever walk abroad, or make visits, without him. And the business of this officer is, when two, three, or more persons are in company, gently to strike with his bladder the mouth of him who is to speak, and the right ear of him or them to whom 143 the speaker addresses himself. This flapper is likewise employed diligently to attend his master in his walks, and upon occasion to give him a soft flap on his eyes; because he is always so wrapped up in cogitation, that he is in manifest danger of falling down every precipice, and bouncing his head against every post; and in the streets, of justling others, or being justled himself into the kennel.
It was necessary to give the reader this information, without which he would be at the same loss with me to understand the proceedings of these people, as they conducted me up the stairs to the top of the island, and from thence to the royal palace. While we were ascending, they forgot several times what they were about, and left me to myself, till their memories were again roused by their flappers; for they appeared altogether unmoved by the sight of my foreign habit and countenance, and by the shouts of the vulgar, whose thoughts and minds were more disengaged."
Jonathan Swift, Gulliver’s Travels; 1726. Published by the Penguin Group, London. 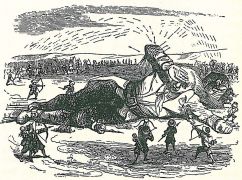 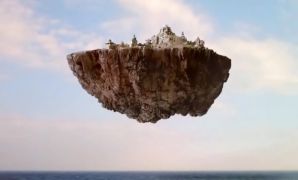