Keiko Sei is a Japanese writer, curator, and advocate of independent media. After working as a video curator in Japan since the early 1980s, running an organization for videoart and independent video, she moved to Eastern Europe in 1988 to research the communist bloc media scene.

In 2002, she has moved out of Czech Republic and was based in Bangkok to continue her research on independent media in Southeast Asia, especially Burma, where she founded the Myanmar Moving Image Center in 2003.

She has initiated and worked as curator on various projects, including The Media Are With Us - The Role of Television in the Romanian Revolution (Budapest, 1990); the video program The Age of Nikola Tesla (Osnabrück, 1991); Ostranenie (Dessau, 1993), Prague_Media_Symposium, Ex Oriente Lux - Romanian Video Week (Bucharest, 1993); Orbis Fictus exhibition (Prague, 1995) and exhibition POLITIK-UM/New Engamement, (Prague, 2002); and as editor of documenta 12 magazines project (2006–2007).

She has taught and given lectures on media art, independent media, and media activism at numerous institutions, including Video/Performance/Multimedia Studio of the Technical University of Brno (1998-2002); Kazakhstan (1999); and the University of Media Art and Design in Karlsruhe (HfG) where she currently teaches as a guest professor.

Her video archive, which has been collected in transition across different continents (1988-1999), was exhibited to the public at translocation_new media/art, Generali Foundation, in Vienna in 1999, and the German media described it as "the biggest collection of revolutionary videos in private hands."

She has written for Umělec magazine and Respekt in the Czech Republic and numerous publications worldwide, with the overall focus of her essays being society in transition. 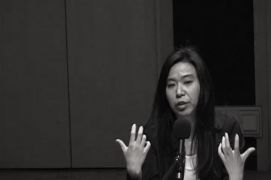