“If you are impatient to realize yourselves, leave your bodies outside. Here, only souls enter. The flesh is good for nothing.”

(St. Bernard's advice to novices)
"In this place I was constantly aware of thresholds. Standing at the level of the pool, I was aware of the forces that hold me delicately between bellow and above; between matter and spirit, within the treshold we call flesh. And I am reminded of inner forces that hold me not so gently between rest and disruption, peace and longing. These tongues are threshold organs. I call them “thirst.” They could be called “ear,” “rage,” “lies,” “praise” or “lust.” In themselves they are good for nothing – with the next heavy rain they will soften and dissolve, their whiteness will turn the water to milk for a day before their particles settle to the bottom of the monastery's subterranean lake."

Max Streicher (born 1958, Olds, Canada) is a sculptor and installation artist who has worked extensively with kinetic inflatable forms since 1991. He has exhibited in numerous public galleries and artist-run centers across Canada, and has completed several site-specific projects in Venice, Sienna, Stockholm and Germany. He was a founding member of the ‘Nethermind’ collective of artists, which organized four large exhibitions in alternative spaces in Toronto between 1991 and 1995.

Streicher sews together lightweight polyethylene cloth, which is typically used for hi-tech industrial applications, to create lifelike sculptures. The resulting forms are inflated by industrial fans and simple valve mechanisms to animate them with a surrogate life which engages viewers in an experience that is both bodily and interactive. 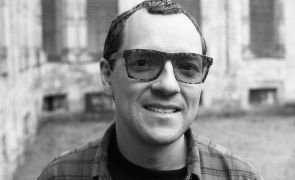