text from the CD ROM

REMARKS ON COLOUR AND SOUND

Colour is nothing less than the embodiment of the world.
Each tone of the colour spectrum,
their subtle shadows emerging out of black to black again,
is simultaneously part of the universe as a whole.
Each is a scent of the ozone, which, like the memory of a lightning flash,
is framed by the arch of the rainbow.

Each eye sees colour in its own way;
perhaps, what you call blue, appears to me as red . . .
LUDWIG TIECK, Geschichte des Herrn William Lovell, 1795-96

The richness of colour is my own colour.
ATHANASIUS GRÜN (from: Otokar Fischer, Letter on Colour,
Volné Směry, June 1910)

The CD-ROM itself is an interactive presentation of what we may be called a collection. It is made up of digitally-created media which permits the viewer to navigate through text, image, sound, filmed and videotaped sequences. The original material comprises documents of my work on the landscape in its broader historical context.

In these explorations, I have been searching for a wholeness which is perceptible in eternally cyclical transformations; this wholeness is something which escapes one's direct view. I believe that work with relationships among individual phenomena leads one to the understanding of them in their fuller meaning.

It is hoped that ORBIS SENSUALIUM VARIUS will be seen as an intensive personal journey through the world, its breadth of colours, forms, motions, sounds, and metamorphoses.

The perusal of the CD-ROM through its hyper-linked paths permits a type of movement which departs, for example, from a collection of journal entries or a systematic indexing of textual, photographic or pictorial characteristics. The data are thus recorded within an imaginary map of a landscape through which one may journey in time and space

For me the destiny of this collection is extraordinary and very personal because the collection consists of things - which I am - some of which are really in close connection to my earliest childhood. The first findings date back to approx. half of the fifties when I obviously did not have any idea of such a collection at all, but for instance our school cabinet here in Jičín had always fascinated me. Another big experience for me was my first visit to the National Museum collections in Prague. I was, as you can see, totally shocked with all of this. And all my childhood I was surrounded by classification keys in plants, animals and minerals - everything was somehow interconnected then and the system of various boxes and cases was being created. There were various things, from pebbles, beetles or plants to I don't know what else.

With the collection expanding, the possibilities of comparison also increased, and the endless coloured variety of the world which surrounds us was seen more and more increasingly. Just like when you display various colour shades together for comparison: When you compare different languages that describe the shades, and as you think of roots connecting them, amazing richness is open for man. The richness of the sphere that starts to be discernible when man touches the world and tries to give it a word and understand it.

Can you see how dusty it is? How marvellous it is - from the brown thing which is mouldered - completely a sulphuric hue? So, we will see.

An old item number  - an olivine rubble, the yellow is even fused with the relationship there. Now then, this is some pulverised soil from somewhere around the Tábor hill, a hill near the town of Jičín. Such brownish rosy tint - it must have been found somewhere in the Podkrkonoší submountain area, somewhere just off Černý dùl (the Black Valley) - some coarser and softer bits in there. I have sieved some of the specimens later and made into two separate parts - it is more like grit in one dish and a soft colour dust in the other; and it is interesting that two entirely different, considerably different hues are created as a result of only the simple division of one place.

Specimens of plant origin are of entirely different character, as you know. Well, here are the marigold petals; and once again these can be crushed and dust can be made of them. And the dust, the yellowish hue, is again totally different from the hue of the original specimen. The great richness lies in the alchemy of procession, further procession of the place. And this also is included in the collection, or an assorted set.

Such is my daybook, but at the some time it is something which goes beyond the common form of a daybook. The strange fact is that a classical daybook is really a book. The colour collection as is here, when unfolded, makes a sort of a field of places. The pages are next to each other and their relationships can be infinitely variegated. And I am also very much interested in such possibility. How different times and different places merge - could be in one place, when I decide to present my collection. 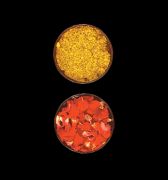