Ivan Kafka: The Říp in the West, the Hill for Walking Around

"Examination of the exhibition object of Mr. Kafka revealed that his exhibit was made of hay, which significantly increases the fire load of the object in which it is located. The hay is not sufficiently dried and it is in such quantity that it can succumb to spontaneous ignition. For this reason, I will lay down the following measures:
1. Depth thermometers for hay measurements will be provided
2. The temperature measurement will be performed at least once per hour at the measuring points
3. During measurement, the temperature of the entire measuring rod will be verified...
4. When the temperature is 50 degrees, the hay will be removed immediately from the open space. The above works will be performed under fire assistance.
5. There will be so many hoses for exposure to the nearest hydrant so that extinguishing water can be fed to the exposed site.
6. On the agreement of OU SPO Plzeň-north, the commander of the fire brigade Plasy will check whether the measures are sufficient and whether they are fulfilled. In case of need, these measures shall be supplemented."

Kafka proposed the installation for one of Santini´s rondels on the corner of the first floor of the convent. It is a variant of his "Kafkaesk" hills, mountains, heaps, cones and mole hills, that can be traced in his work since the early 1970s, probably emerging from the imprint of the landscape around the village of Branisov, where Kafka grew up. The most famous of this series is "Reality + Dream / Two Realities," erected near the quarry near Salzburg, Austria in 1990. There, Kafka visually linked the missing top of his stone pyramid with the outline of a distant Alpine top hill, visible from a single spot as a paradoxical merging of material form with illusion. Karel Srp interprets it as Kafka's most metaphysical work, as "a metaphor of the path to an unattainable summit," the path towards transcendence. But it is also an allusion to the absurdity of political and geographical borders. The sculpture in Plasy was created in dialogue with the septogon of the ground plan (and especially of the ceiling) of the rondel. The second reference hints to the mythology of the famous Czech sacred mountain, hidden in the title "Řip in the West." Říp is a solitary mountain that can be walked around and most of the pilgrims walk their way in just such a way towards the summit. The "Řip in the West" could also be bypassed in the roundabout and the top of the hill was - just like in the case of the real mountain Řip - for the viewer inside the room invisible, beyond the horizon.

The production of the huge hay sculpture was very complicated and demanding: the volume of the necessary material had an estimated weight of 12,000 kg, and Kafka, as a genuine pedant, refused to construct a hollow statue. Finaly, the hay from the Obora agricultural union was, thanks to Ivo Kornatovský, managed with the help of foreign students who arrived at the symposium via the INEX agency. The twelve tons of hay was moved through the window to the first floor and, thanks to the keeper Mr. Peter Bukovský, we received permission to start erecting the statue. Kafka shaped with little tumult a perfect hemisphere within a day or two. Every day, the drying hay shrinks 10 cm and Kafka had to fill up for several days the necessary organic shape. Every day we had to measure the nucleus of Říp with a long thermometer, because the moisture inside the hay in a closed room tends to combust. In a few days, perhaps a week, the "volcanic" temperature actually increased too much and we had to spread the hill across the corridors of the cloister. It was arguably the most heavy and demanding sculpture that was ever created for Plasy, since Matyáš Braun made his famous Saint Luitgardis.

Ivan Kafka (born 1952 in Prague) is a Czech conceptual artist. This is how we may characterize Ivan Kafka´s work in general: Searching for a new identity of the artefact which is static and at the same time has the potential ability for movement, characterized by minimalistic means, lyricism and unsentimental pragmatism. The ability to ask questions related to the current relationship of contemporary civilization to nature, individual freedom and its commitments to society, a strong feeling for creativity of cultural and geographical differences. His work is unique and at the same time open to a broad spectrum of interpretations. He can address the viewers in a simple and universally understandable language – without verbosity, esoteric symbolism or additional speculative commentaries. His work has its firm place on the contemporary international art scene.
Kafka is known especially for his great land-art installations, in which he puts a basically utilitarian object in new relations to events in nature (for example his long-term project entitled Space of Freedom (and Gloom) – modified compositions of windsocks in different parts of Europe). However, he is also interested in investigating the possibilities of enclosed, architecturally firmly determined spaces (for example his interior arrangements of table-tennis balls, halberds, arrows, pinwheels or clock hands which move around but do not show the time, or his recent installation of a suspended, exactly defined plane of pieces of white cotton wool which is an artificial evocation of a cloudy sky). Large formats in Kafka´s work are a challenge to deal with a given space, give it a new sense and order. He uses multipliable means, which in themselves have a quality of some kind of model situation.
Each of Kafka´s works is integral in the sense of the unity of the general and the private. But it is mainly the private that steers Kafka´s creativity. It is potentially present in his large “public” installations, free of unnecessary proclamations. However, from time to time Kafka feels a strong need to focus solely on the private level. It is a kind of private identification of issues that he is primarily concerned with, a research of the essential values of the macro-world to which his installations are related, a composed reflection about the paradoxical relationship between the natural and the artificial. In these cases, Kafka chooses small formats. He does not make a small sculpture or a small installation but he writes his thoughts about space in his private diary.
Such relics of his privacy are also his three plexiglass cubes 6 x 6 x 6 cm, which Kafka displays under the titles “Unseizable Capture,” “Seeming Nothing, Something” and “Close Difference.” The first cube determines the space of a fluff of gossamer, which happens to be a folk symbol of a beautiful, sunny Indian summer. The second cube contains fine poplar-tree seeds covered by silky white hairs resembling cotton wool. The third cube contains layers of spruce-tree needles which does not change throughout the year and larch-tree needles which turn brown and fall in winter. Natural materials do not demonstrate the changes in nature but Kafka´s experiences with nature and especially the really strong impact nature has on his life. Moreover, the exact cube represent the perfect spatial formula. Kafka has always considered a cube to be a basic and “completely free” form. Thanks to their size, the objects enable direct contact which is relativised by the initial thought which is the unstable border between seizability and non-seizability, a desire to “touch something which is not even meant to be touched but is extremely important” and also the importance of the given moment and memory: “The most inconspicuous situations may become the most pressing ones in the course of time.” (I. Kafka)
Hana Rousová
© artycok.tv — Contemporary art online
Unless stated otherwise, all content is distributed under the Creative Commons license
Attribution-Noncommercial-Share Alike 3.0 Unported license 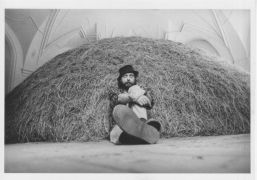