The Mythical Space of Sound Poetry

This Australian collective continually entangles itself with the question “What is sound poetry?”

We’ve selected a rockish arf arf set and begin with our song GAP, Marcus making unholy, inhuman vocalisation NENAGGGG NENNNARRRRGNEEEENNNNRRAAAAG, a wailing, grunting, sighing, wailing again, long word. The crowd falls silent. All faces turn to the stage. We cry out - GAP - and Marcus begins again a rollercoaster of guttural notes. A cry from the audience, and a few voices join in. Everywhere fixed attention. For twenty minutes the pub is a concert hall. … Coming off stage I’m approached by someone elbowing his way through the crowd with a beer in each hand. He hands me one of the beers and says—Thanks mate, I really needed that. (Lovece, “Clanguage15: Byway of Conclusion”)

Complaints that poetry has been undergoing a “decline” exist in a peculiar tension with the rising numbers of poets, poetry books, even poetry TV programs (eg. Million’s Poet) as well as its accessibility and popularity amongst young people (see “Poetizer,” the Czech social network centered around sharing poetry). What really seems to be at stake is the status of poetry on the printed page, poetry in its exclusive, canonized form (Van der Starre, “Why Professor of Poetry candidate Ian Gregson might be wrong”). A look at its subgenres—such as concrete poetry, sound poetry, digital poetry—will quickly confirm the unrewarding nature of potential success there: very few creators ever achieve the status of “classics,” and once they do, their names tend to be repeated, their work left unengaged with. The freedom of the margins seems to disqualify sound poetry from serious study by the seemingly schizophrenic collision of the easy fun it offers and the level of in-depth understanding it requires. It doesn’t seem much of a paradox, then, that the opening anecdote belongs to the same oeuvre as the following:

We saw Cabaret Voltaire only thirty years ago, but Bauhaus were much better. Kurt Schwitters lives in a ‘mythical space’ because he was already dead before we were born. 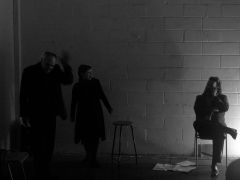