Jérôme Noetinger, a musician, filmmaker, publisher, and organiser who is turning fifty this year, is one of the outstanding figures in French experimental electronics, in particular on its improvisational side. Born in Marseille, he studied electronic music with composer Xavier Garcia in Grenoble and earned a reputation above all as part of the three-member group Metamkine, which he founded in 1987 with the cineastes Christophe Auger and Xavier Quérel.

Metamkine, in full the Cellule d’Intervention Metamkine, is a record label, music promotional collective, but above all a “band,” that is the object of well-deserved admiration for its unique combination of live improvised electronics and film, making novel use of the techniques of expanded cinema. Metamkinian phantoms are created through the use of multiple projectors, mirrors, passing film through several projectors, obstructing projected light with stencils and screens, and other real-time tinkering with the 8mm and 16mm film strip. “One of us deals with the sound, two with the image, the idea being to bring about live film editing,” they say in a rare six-year-old interview in English, concluding with their principle: “everything is completely open.” I dare say this is usually much easier said than done.

With a certain amount of simplification, we might say that Noetinger’s home country, France, holds a privileged position on the electronic music map. It is one of the birthplaces of the genre. The story of radio technician Pierre Schaeffer, along with composer Pierre Henry, splicing tapes and inventing concrete music (musique concrète) in the 1950s is well known and has, after all these years, become a kind of legend. In any case, its history has helped electronic music to become an institution in its own right. After all, its Mecca, IRCAM, is quite symbolically located on Stravinski Square a few steps from the Pompidou Centre. And rightly so, as it is a way for French culture to state, not only symbolically, that it regards as irrelevant the provocative question “why people get Rothko but not Stockhausen,” as put by non-Frenchman David Stubbs in the subtitle of his book Fear of Music.

Jérôme Noetinger does not shun academic circles. One common trait he shares with them is that he will never be forced to use English; he publishes the overwhelming majority of materials about himself and his work in his native tongue. French “post-concrete” music is in fact noted for the fact that its verbosity sometimes almost reaches the level of a radio play and simply ignores the non-francophone audience. (Czech listeners have to use their familiar game of word-guessing that they used in the times “before the Velvet Revolution”; some information will get through and some will not, while the imagination will have its day even where the author’s intention was a most precise expression.)

This, however, does not apply to Noetinger, who is quintessentially an instrumentalist. In his academic sources, Noetinger’s controlled anarchy draws naturally and most importantly on the acoustic. This is evidenced firstly by the fact that he has chosen as his crucial instrument one of the most emblematic devices of the genre: the tape recorder. Often he runs the tape throughout the venue, supporting it with microphone stands.

Noetinger also has a penchant for various “worthless objects” such as plastic cups, pieces of wood and metal that resonate on speakers salvaged from who knows where, and miscellaneous little springs connected to guitar pick-ups, and the like. There are indisputable advantages to this approach. While an electro-acoustic composition may reach a crystalline clarity and impressive multi-channel effects, Noetinger creates on the stage a so-called instant composition with practically zero response time, or one that depends on him alone. Furthermore, the perception of what is “live” shifts considerably over time so it can be said that even if Noetinger “simply” manipulates a tape recorder, his gesture contains much more blood, sweat and tears than if he had used a computer in his playing. Worshippers of contingent operations (a tribe to which I ascribe) and live-coders may object and accuse me of obscurantism, but what I speak about here is above all the dynamics of a person’s presence on the stage. Even if they do nothing specific, his or her presence, movements, and concentration carry a certain “ritualistic potential” and tension that differ from the appearance of a figure in front of a computer, opening up to a far wider scope of connotations thanks to its broader possibilities of use. (The question of whether the bloke on the stage is not actually reading his email has not yet been thoroughly answered and is further obscured by the performers themselves, as few of them will, for example, project the code or the events from their DAW, or will simply – as Peter Rehberg used to do – press play and exit the stage.)

The key terms of Noetinger’s music are perhaps restlessness and bareness of sources of sound. Here art does not imitate nature and the listener always hears only what actually makes sound: wounded machines, dissecting–DIY interventions, “junk.”

In his secular approach to the sublime in electro-acoustic music, Noetinger has found an accomplice in Lionel Marchetti. They play so often together they can almost be described as a band, and as has Noetinger, Marchetti the composer has crossed from the realm of artificiality – although part of his work has remained there – to improvisation and DIY.

To me it is problematic to compare Noetinger’s playing to the music of colleagues such as Ignaz Schick, Günther Müller, or Petr Vrba. The mood, sharp cuts, deliberate indolence, aggression, and clamour even in the middle of silence, serve as a reminder that “art brut” (and everything it implies) was born in France. All this makes Jérôme Noetinger, to my ears, more the musical cousin of Ghédalia Tazartès or even the painter Jean Dubuffet, whose winding, bumpy trail spewing words on the suffocations of fancy culture was traced to French snobbery and their putatively exclusive access to the arts.

Unlike Dubuffet, Noetinger does not look to asylums, nor – as opposed to Tazartès – to exotic roots, but his years of playing in diverse improvisational line-ups – with virtually everybody, as is the custom (the age of AIDS does not engage in free love, but rather in free improvisation) – have taught him not to pay excessive attention to sound. He knows well that an improvisation in which everyone courteously made way for the other would be useless, as well as one in which everybody were to whisper so as not to disturb the whispering of others. Thunderousness, on the other hand, may lead to collisions and interruptions, but this is something he is willing to risk.

The preceding may sound like overinterpretation (googling versus interpreting – who will settle the dispute?), so let me express the impression I am trying to convey in other words: while non-idiomatic improvisation has settled down into a safe idiom of its own (a recent interview with Ian Mikyska with Ritwik Banerji touches on the topic in a slightly different way) and often sees uncertainty covered over with feigned confidence, Jérôme Noetinger is one of those whose playing gives the impression of adventure, staking everything, even at the expense of possibly stumbling into errors or banality, but above all, giving the impression of genuineness, energy, and a desire to dive in.

Looking at the current scene of so-called alternative music, we will see maybe thousands of tape and rattling non-instrument players and film tinkerers whose playing and gear seems like a well-worn cliché. Jérôme Noetinger is a person whose work reminds us of the harsh beauty of a primal creak.

This article was originally published in Czech in HisVoice. 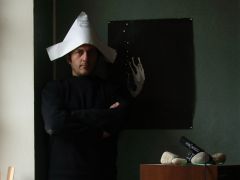