Saving a “Pearl of Functionalism”

Living Villa is an initiative to save and make use of the villa of Johann Nepomuk Kral in Prachatice, which is one of the most valuable buildings of southern Bohemia. Unfortunately it is currently under threat of demolition by the (probably outdated) road redevelopment plan II / 141 of the 1970s.

A monument or a highway?

This South Bohemian “pearl of functionalism” is now empty and awaiting demolition. The society Living Villa strives to be a constructive team of specialists, aimed at rescuing the villa and put it to use for cultural and social activities. Local authorities are cool to this initiative however, and plans to divert the road have not been cancelled, though it is, according to experts, unneeded and does not conform to today’s standards. In 2014 an application was filed to register the building on the list of protected cultural heritage sites. The Ministry of Culture ČR affirmed it, but the town of Prachatice, as the owner, submitted a resolution against this decision, and so the building was removed from the registry in 2017, for the unsurprising reason that the highway needed to be diverted.

The Kral Villa lay empty from 2008–2015, with only homeless people living there. In the years 2015–17, the co-founder of the association, Pavla Zelenková, was able to rent the property for the nominal price of 2,000 CZK a year, and the members began making minor repairs. And much was needed. They cut back plant growth, cleaned out the garden and the adjoining orchards. They installed new eaves, fixed broken windows, removed mold, and painted. They also brought electricity and water back into the building. All in their spare time, in spite of the high financial and physical costs.

The Villa comes back to life

Once repaired, the house has become a center of events. Members began organizing cultural, social and educational events. Over the course of two years, over 80 events have taken place, including concerts, poetry readings, art openings, theater performances, workshops and lectures. Every Wednesday, residents of Prachatice can come and make pizza or bread in a clay oven, which they built with the help of other volunteers in the garden behind the villa. The organizers have been able to bring alternative bands to Prachatice, which would be otherwise difficult for official city events. The high number of visitors confirms the fact that such independent, alternative spaces in the city had been lacking. The was able to create a community that drew from outside the city. People from other regions of the ČR also attended the concerts. The society not only focused on cultural activities, but also on highlighting the architectural and historical value of the building.

In 2017, the city refused to extend the lease. The society had to vacate the property, which was once again left to slumber. Since then, its members have been intensively engaged in the road diversion project, trying to demonstrate its needlessness, and to help find an alternative route. Once the traffic situation in the city is completed, which — the members of the association hope — will reduce the need for the bypass, they can once again continue of the process of designating the house a monument.

The Villa was constructed by Johann Nepomuk Král, whose company was one of the oldest in Prachatice. Kral was a wholesaler of goods, ran a carriage service, and roasted coffee. His commercial success enabled him to build a warehouse in 1931–32 in the neighborhood. The villa, which was designed by the Viennese architect Fritz Reichl, served as his dwelling only until 1945. After the eviction of its owners, the building was first used as a nursery, then a kindergarten, and in later years as a school. The architect of the villa Fritz Reichl (b. 2 Feb. 1890, Baden u Vídně, d. 1959, Los Angeles) was an Austrian architect of Jewish origin, and an adherent of the Viennese modernists. The villa reflects the influence of the architecture of Adolf Loos, which is evident in the constrained mass of the building and in the symmetrical form of the facade. Adolf Loos is also referenced in the composition of the windows, which show the internal arrangement of the house, and the bay window on the main facade. According to Eva Erbanová of the National Heritage Institute in České Budějovice, the villa is, in its quality of architectural design, comparable to the best of this style throughout the country. It has been compared to the Gustav Haas Villa in Písek (1928-1930, architect Ernst Wiesner), and to the protected monument of Paula and Hans Briess in Olomouc (1933-1935, architect Jacques Groag). Residential houses of comparable style can also be found in Vienna, in the model colony of modern  living, the Werkbund Siedlung of 1932. The building was included in the book The Famous Villas of South Bohemia. 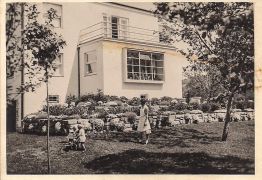 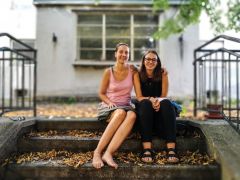