Born 1964 in Lower Saxony, Burkhard Beins has lived in Berlin since 1995. As a composer/performer of experimental music he is known for his definitive use of percussion in combination with selected sound objects. In addition, he works with live-electronics/analog synthesizers and has conceived several sound installations.

Since the late 1980s, Beins has performed at internationally renowned venues and festivals throughout Europe, America, Australia and Asia and has been artist in residence at EMS Stockholm (2014), Künstlerhäuser Worpswede (2009), the Muong Studios, Hoa Binh/Vietnam (2015), and the Robert Rauschenberg Foundation, Captiva/Florida (2017).

Beins leads workshops based on his graphic score system Adapt/Oppose, has published several articles on music theory, and is a co-editor of the book Echtzeitmusik Berlin: Self-Defining a Scene as well as the curator of a follow-up 3CD compilation featuring the Berlin Echtzeitmusik scene. Meanwhile he has released more than 50 CDs and LPs on labels like Zarek, Erstwhile, 2:13 Music, Hat Hut, Potlatch, Absinth, alt.vinyl, God Records, Mikroton, and Confront.

In Prague, Beins collaborates with the Prague Improvisation Orchestra (PIO) on a new composition on the basis of his graphic score Adapt/Oppose (a modular graphic sign system and compositional work tool  developed over the last 12 years. It is based on a handful of basic signs – circles, horizontal lines, curved and dashed diagonal lines – and defines musical spaces for group interaction). The concert will take place in Atrium chapel in October 10 at 7:30pm. Beins also plans other concerts and presentations in Prague Synth Library, Punctum and OGV gallery in Jihlava. And he will perform with trio with George Cremaschi and Matthew Ostrowski at Alternativa festival on November 2.

Burkhard Beins at the Vysočina Regional Gallery in Jihlava 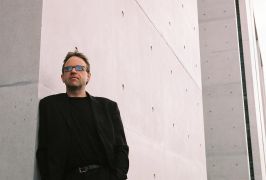 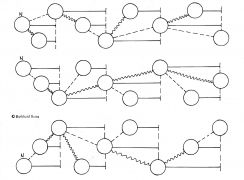 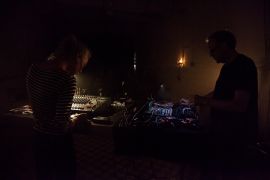