After the critical buzz generated by Scottish filmmaker Paul Wright’s first feature, For Those in Peril (2013), a striking, hallucinatory piece about a survivor’s grief after a tragedy at sea, it’s perhaps a surprise that his follow-up is a found-footage collage on the theme of the British landscape. But in fact the two films make quite a pair, sharing much thematic and stylistic kinship, and it’s refreshing to see a talented young director following his muse rather than taking the career-building route into high-profile drama that might have been expected.

While For Those in Peril blended a social-realist rendering of life in a Scottish fishing town with a mesmerising visualisation of its protagonist’s disintegrating interior state, Wright’s textural use of numerous film stocks and his personal approach to editing (highlighting the potency of unexpected transitions) are given even freer rein here. Since he evidently relished having the run of the National Archive to plunder documentary and fiction-feature footage from the silent era onwards, we never know quite what’s coming next. What unfolds is an exhilarating (if perhaps slightly exhausting) audiovisual journey through shifting perceptions of our native landscape.

The film starts with classic black-and-white postcard shots of postwar English villages, the cottages, the pubs, the rubicund inhabitants, the tilling of the soil. It is the “Merrie England” idea that is ripe for a debunking, a sudden descent into the brutal reality of hardship, discord, class division and racism. Interestingly, Wright holds on to it, and allows us to absorb the fact that, for many, these tropes – chocolate-boxy and trite though they may appear – were not so very far from reality for many people in the 1950s or even now.

From here, Wright moves on to find the exoticism beneath the surface, presenting tableaux of paganism, nonconformism and naturism, which are elided with the subversive protest ethos of punk, 17th-century levellerism, and music festivals nearer our own time. Maybe these ideas are a bit familiar, but Wright has cleverly found quite a bit of archive material from local TV news reports about eccentric local customs, shot on film, and originally presented to viewers in a humorous tongue-in-cheek spirit but now re-edited and recontextualised to bring out the deadly serious strangeness that was there all along. 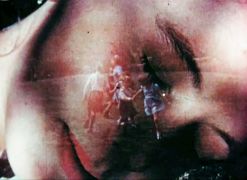