Portuguese dance-installation group in collaboration with an Austrian dancer Helga Guszner - rehearsing of Inside of the Outside, and the Inverse – a dance-installation for a female dancer and four voices to be premiered 20 October 1998 in Lisbon, Portugal. 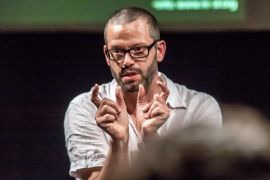