Indifference is the Worst

The Obnaženi society connects artists and cultural activists who have a personal relationship to Chomutov. Many members gained experience at various art schools and prestigious, international art projects, and since 2003 they have been bringing this experience to Chomutov

The Obnaženi society connects artists and cultural activists who have a personal relationship to Chomutov. Many members gained experience at various art schools and prestigious, international art projects, and since 2003 they have been bringing this experience to Chomutov. The society became an organization in 2007, and the interdisciplinary annual festival Obnaženi comprises most of their activity, showcasing some of the best contemporary performance, dance, alternative music, literature and fine art. The association’s vision is to bring to Chomutov and the wider region a platform for interdisciplinary encounters and cultural exchange on a regional, as well as national and international level. It also aims to connect Chomutov with other cultural scenes, and the society’s members keep friendly relations with diverse artists and similarly oriented collectives.

How did the association Obnaženi get its name, and how long have you been shaping the cultural environment of Chomutov?

We had to found the society as an institution in order to draw on funding and organize cultural events. We had been organizing those since 2003 when our group met for the first time, and at the time it was still called Obnaženy. One of our friends who stayed on only during the first year came up with the name. Later, we decided to make the poetic name a bit more gender balanced, so we changed it to Obnaženi. We also use a strange declension system – nominative: Obnaženi, genitive: Obnažen, dative: Obnaženám, accusative: Obnaženy, vocative: Obnaženi, locative: Obnaženách, instrumental: Obnaženami. So Obnaženi have been existing since 2003, when we had our first event, but the association was officially founded in 2007.

How did you manage to decide on the festival’s dramaturgy? How is the program created, are you expanding it?

The festival’s current form is the outcome of a natural process of development, both personal and professional, as well as a reflection of the wishes of the society’s members. The first few years of events took the form of one-day artist meetings – an encounter of diverse genres and art forms in which the organizers often directly took part. Since the earliest beginnings, Obnaženi presented dance, non-verbal theater, and fine art. Presenting our own works turned into presenting other people’s works, and after a few years we felt the need to also expand to other art forms. Over the last ten years, we also remained loyal to choosing and keeping a single theme, and due to this shared annual theme we also found it necessary to expand the repertoire. But when you add concerts, a literary evening, a film night and workshops, it becomes a week-long festival. Gradually, we grew to a three-day, then five-day event and this year we have a festival spanning multiple months. Over the course of this natural development, we also encountered a few rough years. For example in 2010, we had to go back to the single-night, underground format due to the lack of finances. A few years ago, in 2017, we had to cancel the event completely, as we had to take a step back, relax and think about our future direction. But this year (2021) we organized our boldest plan so far, at least in terms of budget. We are a bit nervous, but looking forward!

Is the festival your only activity, or do you come together for other events throughout the year as well?

The only activity which we organize year-long is the Obnaženi festival. Over the course of the year, we have a few meetings and because none of the main organizers and the festival’s original founders live in Chomutov – Klára Alexová has been living in Amsterdam for the last fifteen years, I live in Prague – it is great that the meetings can take place largely online. We all get together in the summer in our hometown and start to physically organize the festival.

How do the residents of Chomutov regard the festival? Has their level of interest changed over the past few years?

Throughout the past eighteen years we developed a certain fan base which largely comes from Chomutov. Each summer, the festival presents internationally acclaimed performances, projects and persons, and sometimes we are disappointed that only a few people show up for the actual event. We keep asking ourselves how many people in Chomutov might have been interested, but then didn’t manage to show up. Although we organize the event mostly for Chomutov natives, we understand that Obnaženi doesn’t really offer events for everyone, as we often present alternative and experimental artists. We are also trying to expand our audience, for example through various workshops where people might get to experience creating art first-hand. Over the past few years, we have also been more involved in public space, which also got more response from the locals. For example, we placed artistic installations in “their” square for a few days, and this elicited strong reactions, and in, a way, we are glad for that. Indifference is the worst. But of course, we prefer it when we get positive reactions to our cultivation of public space.

Currently, we are often hearing about encroaching climate change. Do you also deal with the topic as part of your program?

The needs of our country and of the wider world naturally inform our work and philosophy towards life, so naturally each theme we’ve selected over the past few years (for example Maturation, Together, Restart) has in some way engaged with ecology. Specifically, we addressed the issue of ecology as part of our art workshop and art installations: in 2020, this topic was most openly addressed in the film Requiem for the World as We Know It by the Belgian theater collective De New Tijd, with the music of Haralda Austbø – they transported the audience, as well as the four actors and musicians, to Greenland where they paid homage to the melting glaciers. Climate change isn’t a topic which would be characteristic for our festival, but it always somehow organically became a point of focus.

In 2021, you were in close collaboration with the Ženský spolek (Woman’s Association). What effect did this have? You started planting trees, you and Tereza Dvořáková found a new place for the town gallery. In what way will you continue to collaborate into the future?

We have been working together with Tereza Dvořáková for a while, but it’s true that our collaboration over the last year has been more intense. And it seems that this will continue into the future. I think we managed to find overlap between the goals and dreams of the Woman’s Association and our own. A part of the festival events pertained to cultivating city spaces, and that’s where we overlap with the initiative of the Woman’s Association, who have been cultivating Chomutov’s cityscape for a long time. We are also happy that we found a space to exhibit at the Galerie Město and we are on the same wavelength regarding what we like to present at the Obnaženi festival. Chomutov’s culture and art scene is a small pond, so it is great that various actors are able to collaborate together, all parts profit from collaboration. Thanks to long-term personal friendships and relationships, this developed quite naturally.

The interview was conducted by Dagmar Šubrtová.
Translation by Vít Bohal.

The closing seminar of the Cartography of (Eco)systems: Black Edition project will take place 11 June 2022 at Veřejný sál Hraničář in Ústí nad Labem.

This is part of a series of interviews with artists, cultural managers and initiatives published as part of the working process of the project Cartography of (Eco)systems: RurArtMap and Perpedian Map Black Edition. It is a continuation of our efforts in creating the Perpedian Map, in which we present profiles, overviews, and articles describing some of the smaller cultural initiatives in the regions of the Czech Republic.

Jana Nuslauerová is an artist and art teacher, and one of the founders of the Chomutov festival Obnaženi. She has been organizing the festival along with Klára Alexová. She lives in Prague, but often returns to her hometown to organize and prepare the festival.

Dagmar Šubrtová lives and works in Kladno. She graduated from Kurt Gebauer’s studio of sculpture at the Academy of Arts, Architecture and Design in Prague. She later worked in the studio as assistant until 2013. Apart from her artistic practice, she also works on thematic curatorial projects, such as the long-term dramaturgy of the exhibition program at the Institute of Macromolecular Chemistry of the Czech Academy of Sciences. For a long time she has worked as a curator of the mining museum in former Mayrau mine in Vinařice. She has been mapping the landscape’s long-term transformation as caused by continuing industrialization. Her central theme are peripheral spaces devastated by industry and the dumps and tailings of open-pit mines. She does not limit her work to refection, but also tends towards sculptural interpretation of the new-formed spaces of the so-called ‘new wilderness,’ which provide physical proof of nature’s capacity to regenerate. Since 2015, she has been involved in the project Na pomezí samoty / Frontiers of Solitude which analyzes the contemporary questions pertaining to landscape transformation and the connection of post-industrial society and nature. Since 1992, she has taken part in a number of solo exhibitions, her work was represented in many group exhibitions, and she has created more exhibitions as curator. She is co-author of the publication Průvodce Současná umělecká díla v krajině (with R. Schmelzová and R. Mikuláš, Academia, 2014). 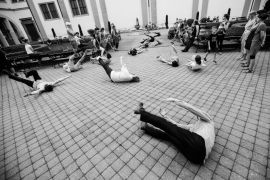 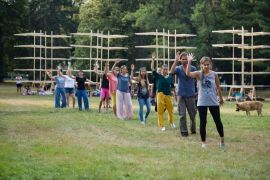 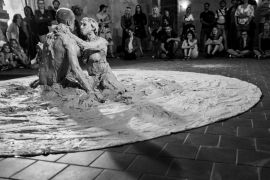 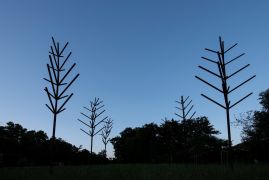 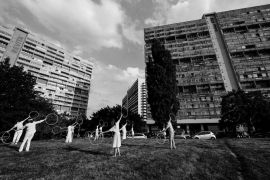