A Gallery for the Taking

Artur Magrot and Alessandra (Alex) Svátek founded Ukradená Galerie (“The Stolen Gallery”) in 2010 in Český Krumlov, a town well known not only for its picturesque qualities, but also for its art high school, Svaté Anežky České, that educates a sizeable share of Czech and Slovak artists.

Despite the throngs of tourists, a heady concentration of art students, and residency programs run by the Egon Schiele Center, the town remains quiet, a sleeping beauty on the banks of the Vltava. And perhaps because it is full of students and often visited by international artists, Český Krumlov is hungry for alternative culture, something Magrot and Svátek readily discovered when the idea for Ukradená Galerie came to them.

The couple forms an Italo-Czech (Alex is Italian and Czech) art duo working primarily in “public spaces based on the street-art principle. Their approach combines intuition, subtle poetics, and responses to specific conditions and environmental concerns —(aapage.info).” After some time, the duo felt they should do something to share what they were doing in public space with others. Walking around Český Krumlov one day, Artur and Alex noticed a “nastěnka” a display box, of the kind used in the past for various local announcements. The idea for Ukradená Galerie was born right there and then when they cut the lock off of the display box, put some of their own work inside and invited passerby to view it. They then agreed that if the “exhibition” managed to survive the week, they’d repeat the process, together with an “opening.”

Ukradená Galerie comes out of a tradition of street art while playing with elements of the art establishment. “The gallery’s stolen,” says Artur. “But the question is not only who stole it but also whether it was stolen from you or for you?” The gallery name thus veers off into questions of art politics and the institutionalization of art while confronting what has been proved to be the very thin line between street art and exhibition art. At the same time, Ukradená Galerie functions “like street art” as “a part of public space with minimal-to-no curatorial trajectory.” Artur notes that the gallery is not selective, remaining completely open to anyone who would like to exhibit.

Hosting exhibition openings on Sunday evenings, when virtually everything in Český Krumlov is closed, made the gallery popular from the beginning. Every week up to sixty people would gather around the small wooden display case. Word in the small town spread quickly and before long, Ukradená Galerie started to expand. Radek Wohlmuth, an art historian and curator, moved to Český Krumlov around the time of the gallery’s founding. His interest in the project and consequent contextualization within the framework of the “art world,” also helped put Ukradená Galerie in the spotlight. Wohlmuth characterized the duo as a “freely swinging pendulum between street and ‘classic’ art, the street and galleries, legal and illegal zones —(artcasopis.cz).” Ukradená Galerie is a continuation of this pendulum’s motion, having spread not only beyond Český Krumlov, but also beyond the country’s borders with galleries in Linz, Dresden, and London and previous locations in Milan and Lisbon.

Ukradená Galerie’s expansion to other European cities outside of Central Europe brought about the realization that the display boxes, which are so common in the Eastern block, were not to be found in Germany, Austria, or Italy. Magrot and Svátek solve this issue simply. “If someone wants to start an Ukradená Galerie somewhere and they don’t have a display box, then we send them one.” These display boxes are handmade originals, taken from the street “out of principle” when it becomes clear that the nastěnka isn’t being used and will be eventually removed, only to be replaced by a new, plastic, factory-produced one. The preservation of these old boxes, along with their dissemination to new locations, where they are given a novel use-value is evidence of Ukradená Galerie’s resistance to contemporary trends of fast consumption and waste. Here re-use, recycling, and reinventing are essential components of the overall concept of Ukradená Galerie. At the same time, neither Magrot nor Svátek are militant about keeping the gallery confined to these display boxes. Sending a nastěnka to a gallery-founding enthusiast is simply a gesture of good will. What each individual Ukradená Galerie chooses to do, on the other hand, is up to them.

Originally, like a traditional gallery, Ukradená Galerie stayed in one place. Yet in Linz, Austria, maintaining a stationary display box was a problem. As a result, the Ukradená Galerie in Linz decided to go mobile, attaching their nastěnka to a trolley that could be, in turn, rolled to a new location and then secured with a lock and chain. Inspired by their own offshoot, the Ukradená Galerie in Prague made a transportable gallery as well. “It makes things interesting,” reflects Artur, “Because it allows the artist to choose their context.”

Other evolutions have also occurred in the Ukradená Galerie over the course of seven years and over a thousand exhibitions. “The nastěnka is always just a starting point,” says Magrot. “Artists often choose to go beyond it and we try to accommodate them as much as possible, looking for things that are compatible with this sort of guerilla-instant type of event. For example, a chargeable amp or screen.”

Asked about the gallery’s relation to performance art or the concept of a “happening” Artur concedes that the latter is “a sort of synonym for Ukradená Galerie.” This in turn isn’t limited to the “opening” itself, but also the process leading up to it. “Riding through town with a display box on your back itself brings up questions from onlookers,” says Magrot. “And that’s part of it, we want to reach into the public space and somehow mold it.”

The gallery’s public, according to Magrot, is made up of “three branches: those who have become ‘regulars,’ exhibiting artists and their friends, and passersby.” Ukradená Galerie openings happen at night, featuring large groups of people crowded around a relatively small object of interest. This in itself creates a sense of mystery, enticing those simply walking by to stop and observe, and perhaps even join in.

The Ukradená Galerie webpage, designed by Dušan Marcinko, gives the impression less of an art gallery and more of a secret army database. The webpage, predominantly outfitted in shades of gray, punctuated sparsely with vivid red and a no-nonsense Helvetica font, presents a map of Europe on its homepage pinpointing Ukradená Galerie locations across the continent. This cartographical addition provides a sense of adventure, the various galleries becoming the coveted destinations of a cultural treasure hunt.

The nomadic nature of Ukradená Galerie pushes aside the notions of stability associated with galleries and exhibiting spaces. We have been taught to expect exhibitions and installations to remain stationary. At the very least, an institution is seen as static. By subverting this expectation, Ukradená Galerie both moves closer to the street art aesthetic out of which it arose while cleverly continuing to examine the structures inherent within our conceptions of art today. Similarly, activities of regular galleries, such as the production of a catalog, elude Ukradená Galerie. This is not a result of a desire to snub convention but rather a practical matter. “Creating a catalog means closing off a certain period of time, as if it was finished and over. This project is hybrid in nature, and until it finishes, which has to happen at some point, we can’t put out a catalog.” As of now, Ukradená Galerie shows no signs of ending or even slowing down, with several new exhibitions opening each month across a variety of European cities.

The current era is a confusing one in art. Artists struggle to make sense of their own practice within a context of post-everything and rampant commoditization and capitalism. Even street art and graffiti have gone through the galleries and art markets, sold torn from the street or dubiously duplicated on canvas. Yet initiatives like Ukradená Galerie provide comfort as utterly open and unassuming projects with no hard-driven endgames. It seems the only goal of such an undertaking is to ask questions through actions and see where those actions may lead. 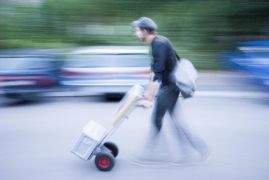