Composer Michal Rataj works primarily with electroacoustic and instrumental music in the area of live electronics.

Rataj has composed music for film (Long Live the Family, The Czech Century), and has created dozens of music and audio compositions for radio plays. Since 2003, he has been the producer of the Radioateliér premier broadcast series on Czech Radio’s Vltava station. He teaches at NYU Prague and HAMU’s department of composition and leads a number of international workshops. 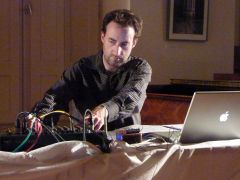