Two Images are projected diagonally onto the lawn from two facing windows from the break of dawn. On the grass in front each facade photographed and digitally altered image of that same facade can be seen, thrown like a reverse shadow into the inner courtyard.

During the installation the inner courtyard was not accessible. Spectators can look at the work from all four sides through the window of the two floors of the dimly illuminated corridors experiencing the constantly changing view.

The documentation of the piece was published in the catalogue Meridian Crossing in 1995, but was realized in June 1996 as part of the Sub Rosa festival.

Claudia Wissmann (1964) in German visual artist. After studying at Kunstakademie Münster (1985-91) and at the University of Reading, GB (1988-89) first dealt with the medium of video. Their main interest nowadays is the combination of light and architecture, light and nature. Claudia Wissmann not only uses artificial electric light as a creative medium, but also uses daylight in various forms of reflection. The artist is not concerned with the illumination of buildings or nature forms, but with a change in perception and reinterpretation by light. In recent years, Claudia Wissmann has also devoted more and more to working with children. The Mobile Atelier, which was founded in Hanover with the artists Ute Heuer, Kirsten Mosel and Andrea von Ludinghausen, organizes week-long workshops in kindergartens run by the artists and bringing children from 3 to 6 years to the various expressions of art. 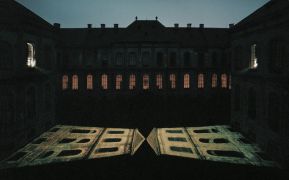