Chomutov, For the Better

We chatted with Petr Karásek about the society Kuprospěchu (FortheBetter), and about the difficulties of organizing cultural events without the city's support.

It is usually travelers on their way to the increasingly popular Krušné Hory (the Ore Mountains) who pass through Chomutov, but even they often prefer to pass by than to stop. The surrounding landscape, corroded by industry, but also offering largely uninhabited expanses of green forest, certainly has specific genius loci. One evening in late July, I met with Petr Karásek, the founding member of Kuprospěchu (FortheBetter), a group/society based in and around Chomutov. The renovated historical center was bereft of people, as was the pleasant Café Rouge, nestled between the small houses directly adjacent to the presbytery of St. Catherine’s church.

Karásek founded the society with his friend from high school, and its core has now grown to about ten members from all walks of life (production, teaching, journalism, law, labor, social work and marketing) who have decided not to take the usual road followed by most of their peers, but to “stay in their hometown, working for the benefit of the public sector and attempting to solve at least some of the afflictions plaguing the locals.”

From its very beginning, the society aimed at helping the regeneration of the city and its environs through cultural activities, and attempted to stem the exodus of active people from the region. Their shared interest in music, as well as the proximity of the German border, eventually fostered the festival Cumbajšpíl. “The fact that we live on the border became one of the major themes, as we believe that it is good to patch up relationships. We started going to Annanberg, or Chemnitz, where we met people who brought over bands, and vice versa.” The festival is the culmination of the year’s activities and this year will be the thirteenth of its operation.

The society grew into its golden era when it took over the devastated movie theatre Evropa located in Chomutov’s suburb of Březinecká. The cinema, dating back to socialist times, was built to accommodate five hundred audience members. “At the time when we requested the use of the cinema, the space was decrepit, but everything was still operational — the water, electricity, windows … We were in negotiations for about a year and a half, maybe two, but we succeeded and they allowed us to rent it long-term. However, during all this time they still hadn’t taken proper care of it. The locale is a bit of a no-man’s land. By the time we signed the contracts, the cinema was in bad shape. We started by taking out all the rubbish inside — eight large containers altogether. Every free afternoon we had we spent there.”

Thanks to the young organizers’ zeal, they managed to run a music and leisure time club there for three full years. Apart from three stages, rehearsal rooms and a music studio, there was a bicycle repair shop, equipment for screen printing, a covered skateboarding ramp, and the walls were made available for legal graffiti. Honza, the current manager of Café Rouge, organized concerts and became a pioneer of the free techno scene in the region. People came from all over the Czech Republic. Gradually, it became necessary to think about more invasive repairs to the building. The society had the project documentation worked out and was seeking grant opportunities. “The very moment we got to this point we received a notice of the immediate termination of our lease.” The city council cancelled the project in 2009. The cinema then started falling apart once again, until it became necessary to tear it down.

It is just such a lack of support from the city council which constitutes the biggest hindrance to the group’s activities, as it has now become difficult to get permission for even single events. This year, after thirteen successful years of operation, the festival Cumbajšpíl is in jeopardy. The very first event took place in the city park, then for one year it moved to the abandoned city spa, another year it was held in a monumental building dating back to socialist times, just a stone’s throw away from the city center. “We really pushed the spa though from the beginning, and it was one of the best events we ever did. The building is huge and offers many hidden alcoves. There was no obvious reason for it not to continue, but, of course, next year it suddenly became impossible.” Then the festival moved to Chomutov’s railway station whose main building is however currently under reconstruction. “Of course I tried to negotiate again with city hall, but to no avail.”

An integral part of the society’s activities is their focus on social topics. Local people of the Sudeten region often lack a sense of home, are subjected to a lack of work opportunities, and the policies regarding marginalized areas are not satisfactory. Kuprospěchu thus devote their time to children from marginalized suburbs, organizing skateboard races for the youth, as well as exchange programs between Chomutov and Chemnitz. Night Out, the by-now traditional event which consists of sleeping on the streets out of solidarity, directly addresses the issue of homelessness. As part of their communal bicycle rides they draw attention to the need for sustainable modes of transportation. They also organize environmental education programs for schools.

Petr laments the fact that Chomutov, in a way, missed its chance. “At the beginning, we used to follow the trends abroad and attempted to bring them home, and so we were fairly ahead in many things. For instance, we started mapping out art of the normalization period (the MOZAIKY project) ten years ago already. Hardcore bands were coming here from all over the world. Today, I find that there are many more events taking place in much smaller cities than Chomutov, which altogether has about 70,000 inhabitants. The city council’s negative reactions turned personal. For us, it would have been enough if they hadn’t actively undermined our efforts.”

The dream of having a space of their own has been cancelled, but still, there are many spaces which they would like to rejuvenate at least temporarily. Despite the city council’s long-term hostility, there is still energy for hosting a few regular events. “We always try to find an interesting place for them — somewhere special, even for us, so that we can enjoy it.” In June they brushed up the garden of a villa which formerly belonged to a local Jewish family. “In the windows of the decrepit villa we installed the silhouettes of Mr. and Mrs. Goldmann, and we put together an exhibition in the adjacent gazebo. This is generally the type of events we are trying to organize nowadays.” 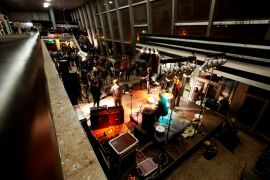 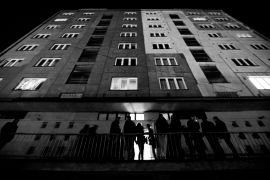 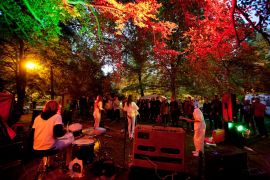 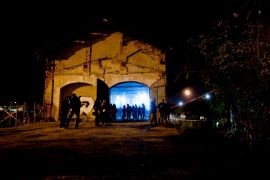 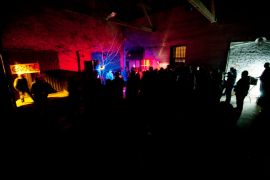 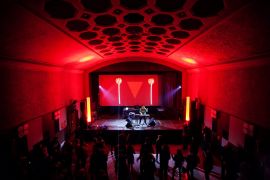