František Novák welcomed us in Třešť directly in front of the shop Potřeby at no. 4 Roosevelt St. He immediately started explaining: the “art supermarket” comprises of a shop window (formerly used for showcasing farm equipment) and the two small, sparsely furnished rooms adjacent to it.

There is only a projection screen, some chairs which look like they came from an abandoned cinema, and simple tables for catering and snacks. At the moment, the shop’s showcase sports poster invitations for a recent amateur film screening, Vyprávění pana Petra (Mr. Petr’s Tale), which took place here at the end of August. The twenty-minute comedy was made right in Třešť over the course of the last few years, and the cast mostly comprises members of the local drama groups Tylovi vrazi (Tyl’s Murderers), Natvrdlí (The Dunces), and Třešťský průměr (Třešť Average).

František Novák opened Potřeby at the beginning of May, 2017, and intended it to rejuvenate the local cultural scene. The conceptualization is still a work in progress. His main idea is to exhibit contemporary artists in the shop window and in the adjacent space which he calls a “self-service supermarket,” because the exhibiting artists write their own descriptions and captions which the audience then absorbs. One of the previous events was an exhibit of illustrations from the book Akademie vět Třešť (Academy of Sentences Třešť) which is an anthology of select Třešť authors. A great advantage is that the space is being offered for free by the local company Podzimek, although the building is being offered for sale, so the space is inevitably only temporary.

It is a space open to a wide gamut of ideas. One of them was offered right as we were standing outside the premises: a young lady with a stroller offered to organize a bazaar there in the near future. Space has been left on the shop sign just in front of the word potřeby (needs), so that one may fill it in with any word one likes. As my guide told me, tongue-in-cheek, Roosevelt St. has aspirations to become a bit of an artistic hub. The tourist information centre is located in neighboring Schumpter house, named after the world-famous economist, scientist and lawyer who was born there. Right next door is a cozy café and confectionary – the Gram café – where various meetings are organized and held, and right across the street from potřeby stands the house where Franz Kafka lodged when he was staying with his uncle.

Třešť is a town of six thousand people in the middle of the Vysočina region which is known, among other things, for its beautifully carved nativity scenes. František Novák himself comes from a family of nativity scene craftsmen. Apart from being a member of the afore-mentioned drama groups which throughout the year perform original plays for an audience of about 100 people, he also plays the trumpet in the popular band Lajky ( on their website the music is described as “loud songs” or “speed-noise”). He also works in the visual arts which he studied at Prague’s Academy of Fine Arts. Most lauded were his life-size and larger-than-life portraits of homeless people which he made on plywood, and then distributed throughout the city and the landscape.

As a side note, the mosaic of Třešť’s cultural life would not be the same without Dedera’s Bikes. The idea to offer the inhabitants bikes free of charge came about three years ago from two members of the T.J. Orel – Pavel Forst and Tomáš Niederhafner. They receive the bikes from people as a gift, then paint them, name them, and distributed them among four places around the city (but they are actively planning to expand to the neighboring villages surrounding Třešť). Thanks to a public fundraiser organized on the Startovač platform for community funding, the project has recently also acquired a pedal boat which is stationed on Váňov lake. Those interested can reserve a slot online. The bikes are not locked, so they often go missing, but are then often found somewhere a bit later. On the project website one can also find photographs and funny stories written by the eighth graders from one of the local elementary schools. 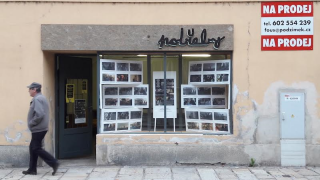 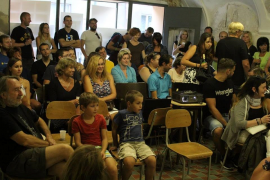 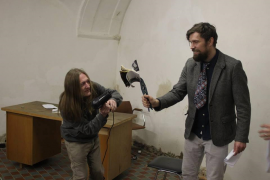 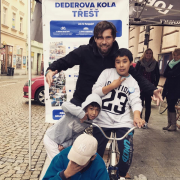 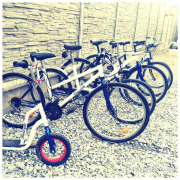