A Report on the Soundworms Ecology Gathering

The event eventually blossomed into an informal but concerted international symposium which hosted participants from numerous European countries, among them Greece, Slovenia, or the UK

The North Bohemian small town of Mariánské Radčice recently hosted a motley assortment of audio-visual artists, makers, scholars and affiliates. The participants of the 2017 Soundworms Gathering spent a full three days in the local parish house of the Church of Our Lady of Sorrows, offering and exchanging ideas on the topics of acoustic ecology, eco-art, sound-art, aesthetics, and environmental activism. If you found such an enumeration of topics slightly broad and unkempt, you would not be mistaken. The themes were numerous and varied, and they deftly modulated between the subjective and the social registers, interweaving elements of direct action with aesthetic distance, ever striving to collapse the rift between the local and the global. Considering the breadth of the topics discussed, what was the reason for organizing such an event, and can it be said to have, in any way, succeeded?

The original impetus for the Gathering came from curator Miloš Vojtěchovský who envisioned a mostly informal gathering which would strengthen the axons of a so-far disparate, but in their respective locales firmly embedded network of ecologically minded (sound and visual) artists, scholars and activists. The professed aim was “to nurture collaborations, especially in the region of Central Europe, between those individuals engaged in tackling issues concerning the environment, ecology, ethnography, sound art, soundscapes, and their impact on society and the biosphere.” The event eventually blossomed into an informal but concerted international symposium which hosted participants from numerous European countries, among them Greece, Slovenia, or the UK.

There were as many expectations from the gathering as there were participants, and one can only assume that some were fulfilled, while others fell through or became lost in translation. Despite the participants’ overall perfect command of English, it quickly became obvious that not all of us spoke quite the same dialect, as each person’s linguistic repertoire was conditioned not only by their place of origin, but largely on the participants’ professional histories, previous studies and vocations. The attempt at a synchronization of the vocabulary in order to facilitate effective and creative communication with one another was one of the essential processes which unfolded throughout the Gathering’s three days. The fuzziness and intrinsic hybridity of some loaded terms, like ‘art’, ‘activism’ or ‘the institution’ became springboards for further investigation, and the din of machines working the nearby Bílina open pit mine created an acoustic backdrop for speaking about the role of art production, education, and formation of knowledge in the various spheres from which the participants came, and to which all of them would eventually return.

Throughout the unfolding encounters we quickly found ourselves to be very much placed and embedded within our own, localized and very much material existences. As such, the Gathering did not constitute a scientific conference, one which would open up the floor for streamlined, linguistic acrobatics, but rather a meeting where each participant mined from the depths of the experience afforded by their field of expertise and their previous activities. It became an interdisciplinary potlatch for sharing quite concrete personal experiences and hypothesizing on their broader socio-political repercussions. This opened up a space for voicing assertions, and demanding their satisfactory justification.

In a pragmatic sense, the specific success of the Gathering lay in its capacity to facilitate and strengthen latent ties between professionals working in a similar field. On a less concrete level, it succeeded in cultivating of an acoustic form of what Fredric Jameson called “cognitive mapping.” The particular merit which can be ascribed to similar interdisciplinary exercises lies in the cultivation of a perception which is not necessarily prescriptive, forward oriented (promethean), or domineering, but rather one that is more tactile, intrinsically distributed and largely embedded within the surrounding environment and its local socius. In our “post-nature” world dominated by sight perception, to refrain from properly listening is to collapse the spectrum of signification which stretches between the polarities of ‘signal’ and ‘noise’, and to reduce the act of listening to a socially conditioned, purely binary stimulus-response mechanism. Such a form of degradation of the acoustic sensibility makes an individual less informed, less social, and ultimately less human. The Gathering did not aim at embracing any form of world-building project done from the shoulders of giants, but rather, for better or for worse, at allowing the participants to wade through the myriad tendrils which enmesh us in our everyday lived experiences. Such ties exert strange attractors, and it was the ultimate outcome of the Gathering to excavate and cultivate some of these ligaments, map out their relationships, and speculate on their wider sociopolitical effects.

Although in its essence socially oriented and politically involved, the wide field of acoustic ecology rarely exhibits a capacity for a Promethean preoccupation with praxis, but rather passively foreshadows broader socio-cultural movements. Much like the blind prophet Tiresias divined from the voices of birds, so do the myriad ears of those listening hear the ominous sounds of climate crisis, accelerating deterritorialization of world populations, and the looming silence of the biosphere’s gradual extinction, happening real time and streamed directly into the secluded solitude of our well-furnished homes. Such a sensibility is often still disengaged from active forms of social and aesthetic design.

How then do we transpose the knowledge gleaned from such a praxis of listening into a frame of action that is active and agential in wider spectrums of society? Although the relationship of art and activism constituted an axis around which many of the discussions revolved, a satisfactory consensus was, perhaps understandably, not reached. The political aspects of art production and its relation to the perceived crises of the everyday became a leitmotif for many of the heated debates, and free speculation on the possibilities and repercussions of direct implementation constituted one of the Gathering’s main affordances. The question and challenge however remains: how does Tiresias reemerge from the prophetic blindness, and reclaim her vision along with her capacity for material action?

Kuai Shen - Stridulation of ants from Agosto Foundation on Vimeo.

The Sound of Paradise: A Few Thoughts on the Acoustic Conditions of Paradise
Soundworms Ecology Gathering: 22 — 24 September 2017
Ideas for Dealing With Natural Material as an Artist: Gertrude Moser-Wagner
For Libkovice: Martin Zet
The Bioacoustics of Ants: Kuai Shen 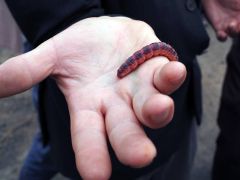