My interdisciplinary artistic research is inspired by ants, by their social mimesis, social resilience and social metamorphosis, by their being and becoming with others. Ants are symbionts in relation to their ecosystem, in the sense that they participate in mutual and parasitic couplings with the environment, hosting other organisms and creating opportunities for the emergence of new social encounters.

The social is everywhere, as social life is a holobiont. It applies to all organisms who engage in mutualism, parasitism, commensalism, symbiosis. When we think about it, leaving categories, taxonomies and canonizations behind, we are not humans, we are social beings like them. They are not insects, they are social beings like us.

By collaborating with ants one is able to mediate hybrid laboratories which react to particular conditions provided by the interaction of two components: the biological (represented by ants, and their interspecies companions, fungi, vegetation, bacteria, the so-called myrmecophiles: commensals, inquilines, parasites) and the technological (composed by electronic devices, sensors, audio-visual materials and algorithms).

Ants challenge the human understanding of society, manifesting a social-ability to the environment, particularly regarding the contemporary capitalocene-related challenges imposed on the planetary ecosystem. Ants are eco-engineers who impact and change ecologies on the micro scale, just like humans do on the macro scale. Their relation to us as carriers of materials, transformers of topologies and creators of opportunities is more than coincidence, and can be revealed in the immanent forces of social contagions which define those living organisms who forge symbiotic organizations.

Furthermore, they have succeeded in invading human habitats which are constantly changing and shifting according to our desires; the anthropocene suits the ants well: they have been colonizing new territories, disturbing ecosystems and displacing other species, traveling around the globe, creating trouble, tensions, but also opportunities for interrelation... new becomings. I’d like to believe that ants and humans can transform reality, as both species may be engaged as a manifestation of interspecies collaboration which is capable to challenge anthropocentric perspectives.

Ants’ network of possibilities should be viewed as networks of relations, a milieu enhanced by pheromones and stridulations. This picture of the ants’ communication system becomes an excellent model coherent with human media, for instance, and the expansion and decentralization of technology. We can refer to Deleuze and Guattari to observe the expansion of the ants as a rhizome; for me, ants represent an artistic model because they offer a remarkable example of natural multiplicity characterized by connection, heterogeneity and rupture. Ants create networks in the complex natural milieu they inhabit, connected by a multiplicity of relations.

At the beginning you create channels of approximations – you approach the social ant, you feel inspired, you feel attracted. You investigate how to listen to them, you want to know what they’re saying and you find out that it is not airborne sound that affects them, but rather vibrations. The bioacoustics of ants is based on wave intensities stimulated by their interrelationships; these vibrations are chirping sounds which modulate their other forms of communication, namely the chemical and tactile, and are called stridulations.

Stridulation is a bioacoustic phenomenon which can be translated as a stimulus which invites others to take action. Stridulation is energy in the form of vibrations produced by a unique microscopic organ, known as the stridulatory organ, which is located on the ant waist, between the rear and torso of the ant’s exoskeleton. This organ is composed by the pars stridens and the plectrum; ants perceive vibrations with their legs, using the so-called subgenual organ. This organ is responsible for what is known as seismic signal reception. It is usually located on the legs (proximal tibia) of most insects which communicate by substrate-borne vibrations. Substrate vibrations provide an adequate stimulus in this organ by setting into motion the fluid within the leg of the insect, which in turn vibrates a septum to which are attached mechanoreceptor units which transmit a signal to the brain of the insect.

Stridulation in ants, as a form of social communication, is an amplification process that allows the local transmission of vibratory signals from one colony member to another. Nevertheless, even though ants can be compared to intelligent machines, and they are approached as such in behavioural models in science, they are in fact simple beings making mistakes, acting sometimes erratically, so that sometimes they create things that are not expected. They are curious living beings. They are constantly changing, resonating, reading the signs from the environment in search for invaders, prey, predators or new friends. By these means, ants’ curiosity can be linked to a different understanding of social cognition. Ants establish a nonverbal communication with their ecological milieu and they learn to adapt to the perturbations of their environment.

Every ant species which has a stridulatory organ produces distinctive frequencies at different intervals. One could, in other words, assume every species has its own voice. Thus I dare to suggest every ant which stridulates expresses its own identity. Vibratory signals complement other social expressions, yet stridulation can also appear as a singular gesture if the case requires so, as my experiments have proven; isolated stridulations appear when there is a state of emergency to convey, or an important message to deliver. Ants can express themselves individually and by doing so they manifest their individual existence.

The stridulatory organ is directly proportional to body size. Minims and minors will develop smaller stridulatory organs compared to majors, the so-called soldiers, who develop bigger organs. Based on my recordings, the signaling pattern of stridulation varies according to the ants’ size but also according to the structure of the organ, for not every organism in the colony is born with the same physical features. For example, the stridulating frequencies of leaf-cutter ants, Atta cephalotes, oscillate from 2-5 kHz, documented for minors (about 4 mm of body length), to a maximum of 38-46 kHz, documented for supersoldiers (about 18 mm of body length).

Stridulation can be approached inter-disciplinarily by comparing it to the emergent sound effect produced by dragging a music record back and forth on a turntable. The stridulation in ants is in fact a gesture that can produce sounds similar to the following turntablism techniques: the baby scratch, the chirp scratch, and even the tear scratch.

On one hand, scratching is the production of sounds by the result of the turntable’s needle rubbing against the grooves of a vinyl. On the other hand, stridulation is produced when two parts of the ant‘s chitin-body rub against each other. Hence, I regard stridulation and scratching both as emergent properties of social systems which can instantiate new stages of interrelation: waves expanding in a community, to the extent that these vibrations become contagious. Moreover, chitin and vinyl can also be related. The polymers that compose both the vinyl and the stridulatory organ share the same ancestral origin: a music record or vinyl is made out of a compound known as polyvinyl chloride, a synthetic polymer into which encoded signals are carved, i.e. the grooves containing the sounds. Chitin is a natural polymer, a derivative of glucose, and it is the main natural compound of an ant’s exoskeleton. The microscopic groove landscape of the vinyl resembles the profile of the pars stridens which is organically carved in the chitin body of the ant’s exoskeleton.

Turntables were not originally meant to be used for scratching; they were created for sound playback as a decoder of media. Yet, this cultural artifact was repurposed, rediscovered, tinkered with, and so it transformed into a musical instrument. For me, it was clear that stridulation and scratching had to be experienced, explored, intertwined and remixed. The sound energy produced by these simple acoustic mechanisms develops into complex forms and acts together as communication portals between humans and ants.

In doing so, I turned “0h!m1gas” into a reactive soundscape which exposes the potential mutualism between technology and biology. A technomorphic chimera: we should listen to the ants and their insect associates, we should repurpose technologies to engage in interspecies cooperations, to embrace that our future, the future of the ecosystem, relies on creating together relationships with each other, including all the difficulties and oppositions that such tasks might entail.

Miloš Vojtěchovský: What was your inspiration to start studying ant behavior?

Kuai Shen: I developed my ant fascination when I went to the rainforest in 2000 for a month to spend time at an indigenous camp, just northeast in the Ecuadorian Amazon. From all the animals I was lucky and honored to encounter, the army ants of the tribe Ecitonini were the most astonishing to my perception. They captivated me, and my young mind was trapped in these thoughts of ants coming from another space and time, from another planet. So, I started writing SF stories (as Donna Haraway puts it, speculative fiction/feminism) around the idea that ants were the first intelligent and socially responsible alien race which colonized Earth.

MV: Why did you decide to focus on their sonic expression, considering that most species of ants are rather quiet?

KS: It started when I was researching about the concept of the superorganism in ants for my first MA thesis. I was trying to meet as many myrmecologists as I could to get better informed. When I talked to Prof. David Donoso about leaf-cutter ants and how they were model social organisms in the eco-engineering of the rainforest ecology; he incidentally asked me if I had listened to their sounds. I told him I didn’t know ants produced sounds and he held an Attini soldier close to me ear and I could hear this eerie acoustic vibration, I have never heard before. That was 2009 in the Yasuni rainforest, next to an oil refinery which is inside the national park and which partially financed (don’t know if they still do) the scientific station of Universidad Catolica de Quito. And returning to the basic question: actually, it would be misleading to believe that most ant species are quiet. In fact, they are constantly making noises when they transform ecological topologies, they excavate, transport and recycle soil materials, thereby producing sounds, mostly vibrations, which humans are not capable of perceiving, but their other nonhuman associates and neighbors do. Furthermore, if one acknowledges that stridulation is produced individually by a mechanical effect which is enacted by the ant individual itself, then one must also accept that the leaf-cutter ant is conscious about its encoded “voice”. The message as part of its language and capacity to socially express needs or danger to others is, in other words, a remarkable subjective gesture of eusocial cognition. 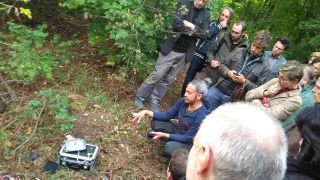 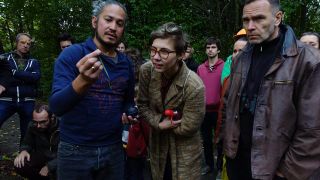 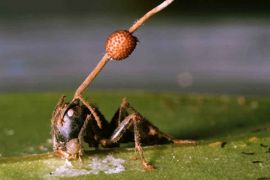