"This mechanical clockwork appeared in the age of the “Technical Middle Ages,” and strikes time in contradiction to it. Therefore the most important period of the day for the dreamers and the most suitable time for playing the clinker is sunset — the fugitive moments tuned with the sound, the character of music and in particular the musician’s feelings, emotions and sentiments. Silence, suitable acoustics and environment are necessary for playing and listening to the Horologe. Numerous unnamed aliquot tones affect themselves acoustically, which in turn inspire and liberate the musicians and listeners. It is a passage through sound. Various elements, which were previously hidden hand in hand with silence, which are part of our lives, slowly rise to the surface." _ _Jaroslav Kořán, 1992

It is quite easy to recognise a dreamer. He walks past you, saying nothing, examining everything with peace of mind, you included, subtly of course, and best if he softly, imperceptibly smiles, all the while clearly fully engaged by himself, by something hidden to you, living through what is inside him, enjoying it in addition to everything around him.. A true dreamer is silently happy in himself, in the depth of their souls, dreamers are often quite people. Mass experiences are not their field, and they perform blind obligations with a dreamers´s will. Everything singularly defined or narrowly strict disturbs them and remains inadequate. Their core is is bound far from the noisy streets, smoke, advertising space, receding to the spheres of the rhythm of existence itself, if possible...

excerpt from the Manifest of Dreamers, 1994

from The history of the Horologe:

One day a clinking sound of a "Sumava Mountain Jingler" emerges out of a maze of cackling, chirping, barking and miaowing, as an invention by J.K. during his vacation in Macice, a quiet village in the Šumava Mountains in the southern Bohemia) It takes years for JK and another dreamer, his brother Michael, to refine the instrument and to bring it to its final form by working patiently on selecting the right metal components: poles, nails, rods, plates etc. This somewhat peculiar installation is introduced as "The Horologe of Dreamers" and its first performance is scheduled for the opening of an exhibiton of "In the Dimensions of Emptiness" on March 18th, 1992 in the Museum of National History in the Moravian town of Olomouc. A third dreamer, Marek Sebelka, participates in the project. The original setup of the three musicians goes through changes. The brothers Kořán's Duo, as the core of the group, stays the longest, as well as the solo performer JK. But gradually the group merges with the FOOD musicians. At first a trio is formed, made up of J.K., Tereza Roglová (vocals) and Richard Horký (cello), later Roman Plischke (guitar) joins the group, followed by Michal Delia and singer and percussionist Milli Janatková.

The Forgotten Orchestra of the Land of Dreamers: sound and light performance
Interview with Jaroslav Kořán: Radoslava Schmelzová
Notes toward the Fungus Symposium in Plasy: Jiří Zemánek
Meridian Crossing CD: Included with the catalogue
Fungus: Inquiry of Place 1145–1995: Art Symposium and Exhibition about Ecology and Art 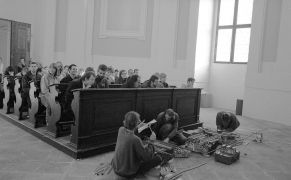