Peter Graham (alias of Jaroslav Štastný-Pokorný) was born in 1952, studied organ at the Brno Conservatory, and continued study of composition with Alois Pinos at the Janáček Academy of Performing Arts (JAMU) in Brno. After completing his studies, he worked temporarily  as an accompanist at the Conservatory, in theatre, as a music director in radio, as an employee of the Czech Music Fund, as a music school teacher, and as a music editor for Czech TV in Brno. At present, he is employed as a professor at JAMU, Brno, and until 2009 he was the artistic director of Exposition of the New Music Festival (since 1993). His greatest interest however lies in composition. Graham says of his own music, that it "grows as timber in a forest," without predetermined plans and goals. He is concerned with creation itself rather than with the cultivation of the personality: "I am what I do." Several of his works were performed in Great Britain, Germany, Poland, Austria, Italy, Romania, Holland, Sweden, France, USA. In 1993, his chamber cantata Der Erste won second prize in the Musica Iudaica Festival's international competition for works on texts by Franz Kafka. The ensemble Arditti String Quartet performed his early String Quartet No. 1 at the 2nd Prague Contemporary Music Festival Contempuls (on November 9, 2009), and a selection from his earlier composition Caprichos (inspired by the cycle of paintings by Francesco Goya) was performed by DAMA DAMA ensemble at the New Music Exposition 2010 in Brno. 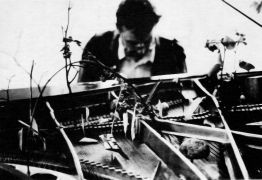