Nicolas Collins, who works with experimental musical instruments and electronic music, will introduce his new instrument to Prague.

"Composition for 2 Zen Turn Tables, Coincidence and Artificial Intelligence".Petr Válek’s artistic aesthetic is emotional and seemingly intuitive. Consumer electronics, radios, keyboards, microphones and loudspeakers are subjected to brutal experiments and combined with objects that are electronically amplified and animated.

The urge to improvise recently pushed me back into the hybrid instrument fray: a trumpet with a built-in speaker, Hall-effect sensors reading valve positions, a breath control and an infrared-equipped toilet plunger (valving and mute movement acoustically filtered the built-in speaker). For 40 years I had chosen technologies according to guidelines that, while perhaps seeming somewhat arbitrary, were based on direct experience: homemade circuitry for touch and instability; software for accurate control and autonomous decisions; musicians for distributed intelligence. With this new instrument I gave myself the challenge of confounding these assumptions: programming a computer to behave and sound like a glitching circuit, and to scramble the interface sufficiently that playing has to be learned afresh on each re-boot. Now I’m in a position of not only improvising with other players, but improvising with the instrument itself. In a nod to David Tudor’s legendary composition Bandoneon I’ve dubbed my instrument Itrumpet. But where Tudor employed the “I” to indicate “factorial”, I use the sign for its logical property of negation: this is definitely not a trumpet. !Trumpet was premiered in duo with Ben Neill in February 2018. I’ve subsequently given performances with it in the USA, South America and Europe, both as a soloist and in collaboration with musicians including Adachi Tomomi, Liz Allbee, Peter Cusack, Axel Dörner, Jonathan Impett, Mazen Kerbaj, Louis Laurain, Arnaud Rivière and Birgit Ulher.

New York born and raised, Nicolas Collins (1954) studied composition with Alvin Lucier at Wesleyan University, worked for many years with David Tudor, and has collaborated with numerous soloists and ensembles around the world. He lived during most of the 1990s in Europe, where he was Visiting Artistic Director of Stichting STEIM (Amsterdam), and a DAAD composer-in-residence in Berlin.

George Cremaschi was born in New York, where he studied music and composition. He lived for many years in California and currently lives in Prague, where he teaches film sound at FAMU. Cremaschi makes use of a variety of approaches in the overlapping areas of music, sound art and noise. Some of his current projects include the groups KRK (with Matthew Ostrowski), Rohr Rohr (with dieb13 and Gino Robair) and Lambs Gamble (with Fritz Welch and Eric Boros). Cremaschi is also a co-founder (with Petr Vrba) and director of Prague Improvisation Orchestra (PIO). As an improviser he has worked with many people including Liz Allbee, Marshall Allen, Han Bennink, Greg Goodman, Mats Gustafsson, Joelle Leandre, Thomas Lehn, Paul Lovens, Louis Moholo, Butch Morris, Evan Parker, Rova Quartet, and Cecil Taylor. 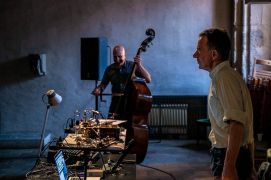 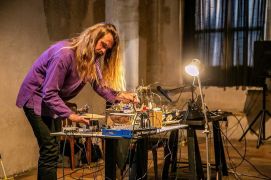