"I am interested in acoustic sounds rich in harmonics and I design instruments to create this kind of sound: a long plastic tube with the paper membrane on which fall drops of water from a suspended drip device; a suspended spring connected with a wire to a tin can and pipe ended with a cone: the spring and the wire are bit in various ways; tubular drums with plastic membrane.

I've played with various new music ensembles in Belgium and abroad. Since 1987, I've done sound installations and performances, solo or with the help of Brigida Romano in many countries. In Plasy I played together with Jaroslav Kořán."

Pierre Berthet is a Belgian sound artist, performer and musician.  Berthet studied percussion at the Brussels Conservatory and spent a lot of time in the bell tower, learning the carillon and listening to the sounds. Slowly, he started to lengthen various objects and instruments with long steel wires connected to can resonators suspended in space, which was probably influenced by the works of people like Alvin Lucier, Terry Fox, and Paul Panhuysen. He also learned from playing for several years with Arnold Dreyblatt’s Orchestra of Excited Strings, and also through his duets with Frederic Le Junter.

Since the 1990s, Berthet has exhibited indoor and outdoor sound and visual installations which adapted to the place where they are exhibited, and also composes materials for live performance. Around 2000, he started to explore various ways of making music with inverted vacuum cleaners. In 2010, he started to perform a piece by Tom Johnson for five sounding Galilean pendula. In 2012, he started to shake dead plants mechanically.  He presents them in exhibitions and solo or duo performances with Brigida Romano (Continuum Asorbus, CD on Sub Rosa) or Frédéric Le Junter (Berthet / Le Junter CD on Vandoeuvre). He collaborated with 13th Tribe" (Ping Pong Anthropology, CD). He also played percussion in Arnold Dreyblatt's Orchestra of Excited Strings (Animal Magnetism, CD on Tzadik; The Sound of One String", CD on Table of the Elements). 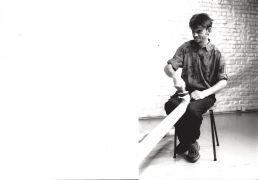