"Often it feels that in my search for something cogent to say (or do) I've been following in the footprints of the 'Mercurial Traveller.' Never quite catching up, never quite catching the gleam in the eye. So instead of constantly chasing after the exclusive, I'm sitting down to eat a favourite meal, hoping this tempts other travellers to come and join me...“
Moules Mariniére

"There are several versions of moules mariniére. Here is one of them: 3 quarts mussels, 1 small onion, 1 clove of garlic, 1 small glass of white wine, a small piece of celery, parsley, salt. Put the chopped onion, garlic, and celery into a large pan with the white wine, and about 1 pint of water. Add pepper but not salt. Put in the well-cleaned mussels, cover the pan and cook until the shells open. Take out the mussels, keep them hot, and thicken the liquid in which they have cooked with 1 oz. of butter and ½ oz. flour. Pour the sauce over the mussels in a large tureen and sprinkle with parsley. Serve very hot. To be eaten out of soup plates, with a fork and soup spoon. Always serve plenty of French bread with moules mariniére."

Elizabeth David
"Having eaten well, we may find the Transparent Messenger amongst us."
Richard Powel, 1994

Richard Powell (born 1958 in London) lives and works in Cardiff. He received a B.A. Degree in Fine Art from Cardiff College of Art in 1981. Richard Powell is a well-known and prolific Cardiff-based artist. His sculptural interventions present the viewer with odd juxtapositions of objects that together create something totally new and unexpected. Powell's work comes out of long periods of research, such as his residency at Cardiff Airport, or his time spent as a postman, tracking shortcuts and paths across the city, which were turned into exhibitions of photographs, conversations and bizarre sculptures made from lead or found objects. Having lived in Cardiff for over 20 years, Richard Powell knows the city well and is intrigued by its developments concerning private/public spaces. Through his work, he explores the meaning of architectural spaces and their usage. He teaches Architecture at The University of Wales, Cardiff. 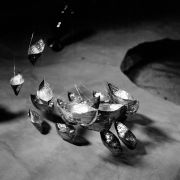 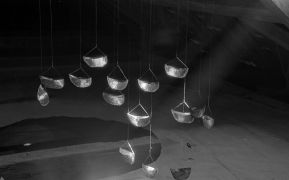 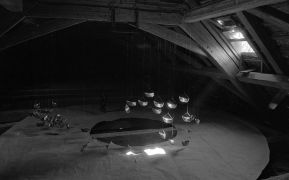 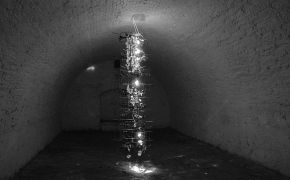 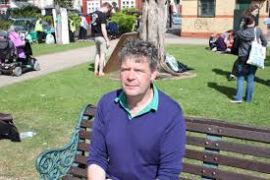