The aim of our project was to create an installation about distorted messages in an environment that can be experienced as "virtual reality,“ alt history without the use of any electronic equipment more advanced than a transistor radio.
In a large darkened room on the second floor of the convent, three metal boxes are hung from the ceiling. The holes in all sides of the metal boxes and the strong light within make them function as "camera obscuras,“ projecting on the walls, the ceiling and the floor of the rooms. Like in an old-fashioned camera obscura, these projections are realized not with lenses, but through a pin-hole. The different projections within the box present distinctly different perspectives of the same object.
The same process of distortion and fragmentation is applied to sound: Three radios are producing sounds from different stations. The sounds however are almost inaudible to the naked ear unless amplified by special parabole antennas that reflect and concentrate it. To reach these effects, small loudspeakers were placed in the focal point of the dishes. The three satellite dishes are slowly rotating and thus scanning the room. Only when, for a short while, the direction of the dishes intersects with the position of the individual will the sound be amplified to the degree that it is audible. The sound then disappears again as the antenna continues to scan the room. As a visual element, a small light is placed in the focal point of the dishes as well, producing a flash of light together with the burst of sound. The movement of the dishes is realized through the use of ventilators moving from side to side. The wind produced by the ventilators gives a sense of space to the darkened room.
With both the sound and the images, we are dealing with distorted messages in which the end results have as much, or in fact more, to do with the process applied in transmitting the message than they do with the original source material.
Anyone entering this room will realize that it is impossible to faithfully discern the exact nature of the original. The distortion inherent in the method of its transmissions has transformed it to such a degree. This is a variation on a theme that has been central to our group's work for over a decade. We gave this theme the name of "tropism", i.e. that which occurs in the peripheral field of vision, and disappears when gazed upon directly. The important and interesting thing for us here is the aspect of frustration.This frustration, basic perhaps to much of the human experience and human action, is put to artistic use. Applied to the messages in the camera obscura, the word 'tropisme' acquires new meaning yet again.The messages are distorted severely, but perhaps the main distortion still comes on the account of the spectator, the visitor of our installation. And it is quite likely that this is something all the visitors would know, but at the same time are unable to avoid. The reality thus received is quite 'virtual, but what is 'behind' it? This seems to be a philosophical or perhaps a political issue. Our main interest is artistic. The installation is not a discourse on truth or on reality, but a presentation mainly of a frustration, that is confronting us and confronting the visitors in real life, while at the same time a 'representation' of reality, a slight hyper-simulation, a deceit, staged to reveal the potential of this frustration.
Stichting Tropisme, Amsterdam, 1994

The residency of the Tropisme group in Plasy was supported by Het Mondrian Fond, The Netherlands.

Tropism emerged in the 1980s as a collaboration between an artist who wanted minimal music to accompany his paintings (Bob van Walderveen), a philosopher who wanted to create text, image and music (Alfred Marseille) and an animation filmmaker who had installations in mind (Robin Noorda). The three of them shared the opinion that a certain degree of humour in art provides the necessary perspective.
They met in 1981 in the Studio for Experimental Electronic Music in Haarlem. The first pre-tropistic events took place mainly in audiovisual and poetronic spheres. This was also the time that the first four-dimensional paintings were created. The collaboration culminated in a bizarre party in the overgrown garden of the burnt down house of WWII criminal Pieter Menten, located opposite the ancestral home of Robin Noorda. In 1986, the Tropist Manifest was released and the Tropism Foundation was established. The founder Bob van Walderveen died suddenly in 1995. With his death, Tropism, after 10 years, seemed to dissolve. Paul Godschalk was involved in Tropism until just before the first exhibition in 1987 and has recently become active again. Sam Samshuizen was a Tropist from 1987 to 1994, Bo Andrea and Marian Schoettle (USA) were active in 1993 and 1994. Current members also include Menno Scharp, Paul Godschack, Margot van den Stolpe and guests.
(excerpt from their official website) 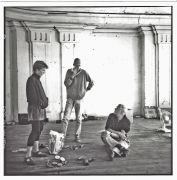