Bram
1993, 68 mins., 16mm
Scenario and Direction: Joost Verhey
D.P.: Maarten Kramer
Production: MM Filmprodukties, Amsterdam
In 1987, as a result of thirty years of suffering from diabetes, the visual artist Bram Cox (1934-1998) lost her eyesight. By turning herself into a sound artist she succeeded in changing her mode of work. Cox turns the environmental sounds she has recorded into compositions, which she subsequently integrates into performances. This film follows her work process while creating a sound project in a Czech convent in Bohemia.
As an artist, she first developed a sensitivity to pictorial language, and later, to auditory language. Through this language, she finds a way to develop further as an artist. In the film, we follow Cox as she seeks out sounds, and in so doing, her implicit view of the world unfolds. Investigating sound in this way gives Cox the opportunity to regain her grip on the world around her.
Producer/director Joost Verhey studied cultural anthropology at the University of Amsterdam. In 1984, he set up the foundation MM film productions, producing and directing several documentaries, such as Lomax the Songhunter by Rogier Kappers (e.g. Golden Calf Best Long Documentary 2005, CINE applied Eagle Award 2006, Emmy nomination 2007), The Silence (2005) by Kim Landstra, In my Father's House by Fatima Jebli Ouazzani (e.g. Hot Docs Award Best International Documentary 1998, Golden Calf Best Long Documentary 1998), Rouch’s Gang (1993) on the French anthropologist Jean Rouch, and Miss Interpreted (1997) on the South-African artist Marlene Dumas.
In 1989 Verhey attended the directors workshop led that year by Johan van der Keuken during the international Documentary Film Festival in Amsterdam (IDFA). In 1990 he studied under the guidance of Frans Swartjes at the Vrije Academie in The Hague and in 2000 he completed a one-year post-graduate Company Management Training program for Producers at the Maurits Binger Film Institute in Amsterdam. He was also a participant at the Film Business School in Lübeck, Germany (2002) and the Film Marketing workshop of Strategies in Luxembourg (2004). In addition, he has appeared as guest lecturer at the Mira Media Academy, the art academy in Arnhem and at the University of Amsterdam.

Man looks at Woman, Woman looks at Man
1999, 18 mins, 35mm, b&w and color
Direction, Scenario, Casting, Editing: Nathalie Alonso Casale and Pavel Semčenko
Production: Titanic Production
Inspired by a story from the Dictionary of the Khazars by Milorad Pavić
Franco-Spanish director, producer, writer and actor Nathalie Alonso Casale (1970) created the short film Man looks at Woman, Woman looks at Man (1999) together with director, filmmaker, visual artist, founder of AKHE theatre and actor Pavel Semčenko from St. Petersburg. Consisting of a loose adaptation of a short story by the writer Milodar Pavić, the film is a sequence of magical-realism images. An early version of the film was captured by Semčenko and Casale on black and white 16mm film during a residency in the Center for Metamedia at Plasy. The film was finalized in Rotterdam on 35mm color film. The work premiered at the Rotterdam film festival in 2000.
In the beginning of the 90s, the authors of Engineering Theatre AKHE created a series of striking experimental performative films amid the anarchistic art community of a squat at 10 Puškynskaja street.
Alonso Casale has collaborated with the AKHE ensemble as a manager, and together they also made the experimental short film Siesta la Tetera y la Rosa! (1997) in Spain. In 1992 Alonso Nathale received the Golden Calf for Best Short Film at the Netherlands Film Festival for her Memorias Sin Batallas y Otros Muertos. The evening will start with an ultraaleatoric infrasound performance by LFNFU (The Legendary Forever Night Frog Unit). 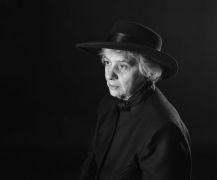 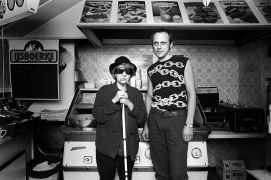 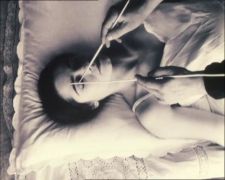 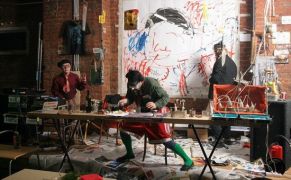 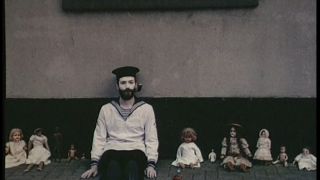 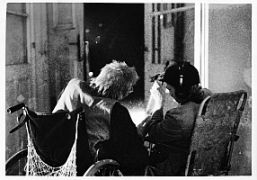 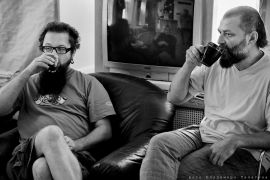 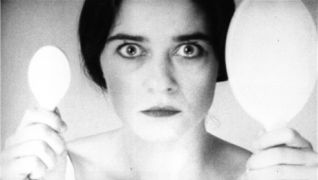