Christof Kurzmann was born in Vienna in 1963. His parents listened to classical music, from Tchaikovsky to Beethoven, all the way up to Smetana, as well as jazz, such as Louis Armstrong, Ella Fitzgerlad and Duke Ellington. As a big fan of Archie Shepp or Davis Murray, Kurzmann chose the tenor saxophone as his first instrument. Afterward, he switched to the clarinet, whose features seemed more interesting in combination with electronics, which later became his main domain.

At sixteen, Kurzmann began organizing concerts for avant-garde artists, including Lol Coxhill, Jon Rose and Louis Sclavis and later on, Don Cherry and Cecil Taylor. Kurzmann also worked as a music publicist, airing non-conformist music on the radio. A pivotal moment for the young musician and publicist was meeting Fred Frith, Tom Cora and, in particular, Jade Fair. Fair persuaded Kurzmann, who was 24 at the time, to join the international music scene, a step he took simply because he failed to see a reason not to. Kurzmann also established the music record label Charhizma, focusing on the electronic and improvisational scene.

Kurzmann has performed in the Czech Republic many times. In 2011, he performed with the group The Magic I.D., with singer and guitarist Margareth Kammerer and the clarinetists Kai Fagaschinski and Michael Thieke as his partners. In all respects, Kurzmann is an autodidact with a sensitivity for sharing his ideas and creating bold concepts, a claim supported whenever he taks on the role of conductor. In 2016, at the vs. Interpretation festival, he worked with the Prague Improvisational Orchestra (PIO), preparing a controlled improvisation using Europe’s recent immigration crisis as a theme, implanted with a distinctive cover of the ABBA hit S.O.S. Considering that Kurzmann has mentioned everything except opera as a source of inspiration for him, his inclusion of the pop song is not terribly suprising.

In late 2016, he performed with the group Made to Break, led by the American saxophonist Ken Vandermark, in Hradec Králové at the international music festival Jazz Goes to Town. Here Kurzmann provided basic compositions upon which other members of the group built, creating new structures. Kurzmann helps this process along with his “lloopping.” Among his notable recent works is the CD Falling, recorded with the Swedish saxophonist Mats Gustafsson.

Kurzmann is a cosmopolitan who both pays homage to his native land while having lived abroad in Berlin or Buenos Aires. Living in cities, Kurzmann leaves himself open to new projects, including his current collaboration with the Czech trumpeter Peter Vrba.

An Interview with Christof Kurzmann: vs. Interpretation 2016 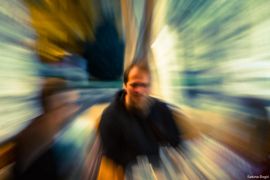