Dawson City: Frozen Time, a feature length film by Bill Morrison (US), pieces together the bizarre true history of a collection of 533 films dating from the 1910s to 1920s, which were lost for over 50 years until being discovered buried in a sub-arctic swimming pool deep in the Yukon Territory.

Using these permafrost protected, rare silent films and newsreels, archival footage, interviews and historical photographs to tell the story, and accompanied by an enigmatic score by Sigur Rós collaborator and composer Alex Somers (Captain Fantastic), Dawson City: Frozen Time depicts a unique history of a Canadian gold rush town by chronicling the life cycle of a singular film collection through its exile, burial, rediscovery, and salvation – and through that collection, how a First Nation hunting camp was transformed and displaced.

Dawson City, located about 350 miles south of the Arctic Circle, is situated at the confluence of the Klondike and Yukon rivers and rests on a bed of permafrost. Historically, the area was an important hunting and fishing camp for a nomadic First Nation tribe known as Tr’ondëk Hwëch’in. The town was settled in 1896 – the same year large-scale cinema projectors were invented – and it became the center of the Klondike Goldrush that brought 100,000 prospectors to the area. The Dawson Amateur Athletic Association (DAAA) opened in 1902 and began showing films and soon, the city became the final stop for a distribution chain that sent prints and newsreels to the Yukon. The films were seldom, if ever, returned.

By the late 1920s, 500,000 feet of film – 500 films – had accumulated in the basement of the local Library, under the care of the Canadian Bank of Commerce. In 1929, Clifford Thomson, bank employee and treasurer of the local hockey association, moved the films to the town’s hockey rink, stacked and covered them with boards and a layer of earth. The now famous Dawson City Collection was uncovered in 1978 when a new recreation center was being built and a bulldozer working its way through a parking lot dug up a horde of film cans.

The films are now housed in the Canadian Archives in Ottawa and at the U.S. Library of Congress, which jointly restored all the titles to 35mm preservation masters.

After the screening, there will be also be a short discussion, “Czech tracks on the snow fields.” Patrik, Irena and Vladan — three Czech residents of Dawson City will reveal how its infamous past affects life in the former epicentre of the Canadian Gold Rush today. Patrik and Irena Pikálkovi have lived in Dawson City since 2012. Irena works in a kindergarten and Patrik runs an IT business and currently also works in the Dawson City commision for the protection of monuments, which adjudicates new developer projects. The discussion will also be joined by Vlada Šálek, a gold miner. 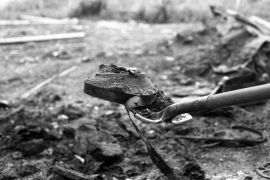 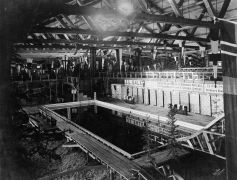 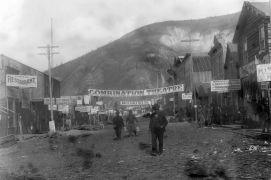 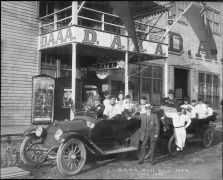 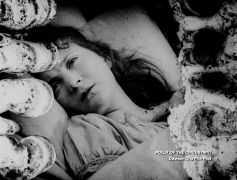 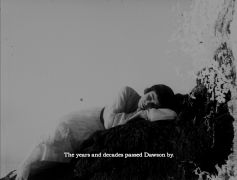 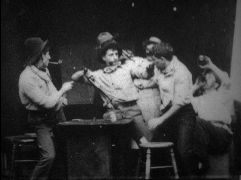