I’m More a Laborer Than a Curator

An interview with Barbora Tichá
Valeč

Barbora Tichá, anthropologist and curator, organizes exhibitions, workshops, and student colloquia at the chateau Valeč, which stands in a Baroque village on the slopes of the Doupov Mountains.

Agosto Foundation: After living in Prague for many years, how did you come to live in this region?

Barbora Tichá: We moved in 2014, but first to Toužim. Both my husband Mikuláš and I graduated in socio-cultural anthropology from the Faculty of Humanities of Charles University. My husband’s work consisted of mapping the local communities and the ecological farms for the Fund for Further Education, working under the auspices of the Ministry of Labour and Social Affairs. This went on from 2014 to 2015. The program was called Work Habits, and was focused on finding and developing local potential in localities with a high unemployment rate, employing people in various non-profit organizations.

In Toužim, we started up a similar project to the current one in Valeč. There, there is also a chateau which is property of the municipality, but it is in bad shape. We founded an association and began discussions with the locals, asking them what they might want to see happen there. Then we recultivated the courtyard, and organized volunteers to make it all happen.

How long were you in Toužim, and is there still anything happening there?

We spent a year in Toužim. Last year it was still us doing most of the work, which was especially demanding during the first year. But our intent was to hand off the activities around Živý zámek Toužim (The Living Chateau Toužim) to the local people, which actually worked out quite well. The cultural events now have to do with history, but there are also music concerts of country, rock, or local productions.

Through mapping the communities, we arrived in Valeč. We often came here as part of the overall project, and when it ended, we decided to move here. We had a small child, and didn’t want to go back to Prague. We wanted to try living in the countryside, and after about six months we decided that we in fact like it. It was at that time that a number of active people also moved in, and we bought an old house, where we have been living for a few months now. That means we have to settle here for a long, long time. We have a second child now, and they both love it here.

What does your work at the chateau consist of?

The chateau looks great from the outside, but in fact, only the facade has been completed. The building burned down in the 70s, and the repairs have been very gradual – it’s a slow process. The chateau has some spaces which could potentially be put to interesting use. Some have been restored with classic white walls, while others have a raw, almost industrial character. There are Gothic cellars, as well as a marble fireplace. These are really great spaces. The chateau tours are conceived so that the visitors can stroll through the chateau on their own, which is certainly very unusual. The classical way of doing a tour consists of a guide taking you through the individual spaces and commenting: “Here they slept, here they ate, here is the porcelain, don’t touch anything.” In Valeč, people buy their tickets at the Information Center and take a printed guide and make the rounds themselves.

As part of my Ph.D. studies, my thesis topic was The Historical Site and its Everyday Use, and so I was in this sense interested in the “life” of historical sites from a phenomenological perspective – how does it speak to people, and how to make of them something more than just untouchable objects, open-air museums and so on. I also did curatorial studies, and here I became acquainted with the possibility of connecting the life of a chateau interior with contemporary art. My final thesis was focused rather on the underlying philosophy and theory of art. It was in this way that I became reacquainted with something practical, connected to contemporary art. This was furthermore at a time when I had to postpone my Ph.D. studies due to the birth of my second child.

Luckily, the Valeč chateau has a young and open-minded keeper who wants the chateau and the park to really offer something special to the visitors. We agreed to do exhibitions of contemporary art there.

Do you do only exhibitions, or also other events?

I mostly curate exhibitions, but there are so many young, active people in the village that it would be impossible to list all the things we do here. Of course, since I already live here, I naturally take part in many events, or I try to get the people and artists who come here to benefit the village life somehow. We have no firm screening process set up. I do everything myself, so as of now it is set up so that the visitors have to be artists, ideally professionals or students. Accommodation during the high season is full (festivals, weddings), so that’s why I organize the panels for the spring or for the end of September.

With regard to the reactions of local people – although I struggle with the label, I do consider myself rather an intellectual, so they call us “hippies.” (Laughter.) But there are also young people here who live in mobile homes and run small, ecological farms.

How did you manage to establish cooperation with the National Heritage Institute?

There is only the keeper and his assistant here, meaning there simply aren’t very many employees. Considering the size of the chateau and its park, the management is quaint, and not too demanding, so we simply came to an agreement. The possibility of exhibiting throughout the whole chateau was my condition. Each exhibition has to go through a whole process, and any intervention into the space must be approved by the NHI. We can hammer only where people have hammered before us.

Regarding the current repairs of the historical greenhouse, that’s the keeper’s initiative. His original profession was in construction, and he is also successful in applying for financial support for projects of reconstruction or repairs. Now it is time to do that for the chateau’s greenhouse. The investment is projected to be 20 million CZK. There are always huge sums involved, such as for the Baroque theatron which is currently in terrible shape. And repairing the Baroque cascades, that’s just unrealistic at the moment.

Has any construction documentation survived which would help in reconstructing the surviving fragments?

The last owner of the chateau was an avid artist, so he left his drawings which, apart from other sources, serve the renovation very well. The Baroque sculptures from the workshop of Matthias Bernard Braun were originally placed on the terraces in front of the chateau (the originals are kept at the depository of Kladruby). Their copies/casts now stand in the chateau’s park, and are placed freely around on the grass, without pedestals.

The chateau keeper founded the oldest association here called Tranquilite, and they have organized many events, including the renovations of the Stations of the Cross, and the old orchards. The summerhouse is also in delapidated condition, and the hill above the park is tunneled through by beer cellars which are kept in operation thanks to European funds.

Why do you think there are so many active people here with a genuine interest in the local community?

It works in this way: when someone moves here, they have some other interested friends, and so the information spreads. The first wave, which we were a part of, also brought in the local ecological farm, which employs volunteers from all over Europe. Then there are the festivals, and various other events which we organize. Sometimes people stay for a while, but it has a tendency to snowball – once someone gets planted someplace, things become easier. I can draw upon th example of Toužim, where we also tried to “enliven” things a bit, but almost all the young people are leaving the town. As soon as they go to study at university in Prague or anywhere else, they don’t come back.

Regarding the local old-time residents, one cannot say that they are taking an active part, but as the activities have been going on for a while, they have gotten used to it. Some people say that not getting the old-time residents to play along with the program will make the activities stop, but I would rather say that it is important to keep a level judgment, not be naive, not overestimate your abilities. Of course, I also sometimes want to just drop everything and have some peace. I think it is good to remain realistic and try to get a sense for the local people who have been living here for much longer than we have. We bring our customs and ways of life which are, of course, a bit different. The locals rarely come for the artist talks, but sometimes they do. It is a gradual process. The eco-farm was at first a laughing stock, but now the old-timers rather respect the owners.

What are your plans for the future?

Historical sites are usually lighted from outside, so I am waiting for an artist who can work with the concept that the chateau would be lighted up from the inside, but also that there could be a projection on the walls, so that you can look at it and also see inside.

My goal is to start a discussion about what historical sites can become, what the spaces can communicate, and how to approach them. Trying to renovate something with pomp or authenticity requires a great deal of money, and can take decades to complete. The result then looks like the interiors in Chyše. I think it is better to draw on contemporary sensibilities.

I had an idea for a symposium on this theme, but I currently lack the time and energy. I am trying not to burn out, bur rather work slowly and diligently. It is just me doing these things, I have two kids and have troubles of my own. Even the keeper sometimes offers ideas. I would, for example, like to have graphic designs, but currently I am doing things rather “punk” – you have what you make. I feel more like a laborer than a curator. 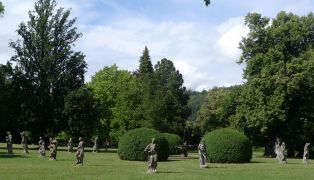 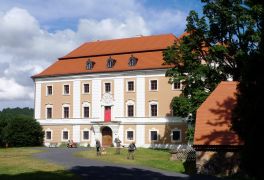 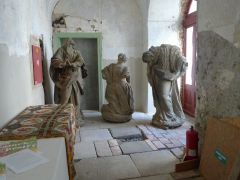 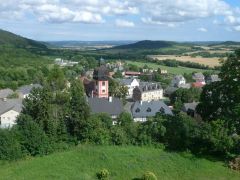 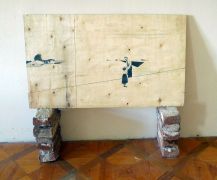 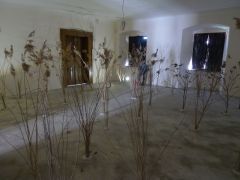 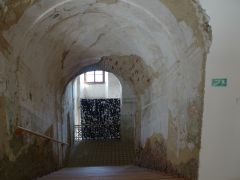 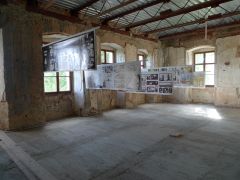 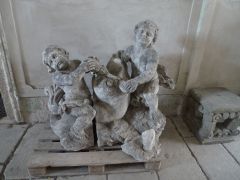 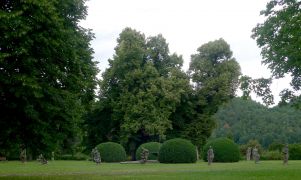 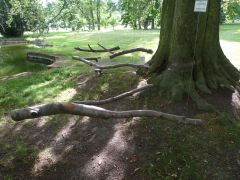