Making Your City Your Own

Upon arriving in Strakonice, the South Bohemian town’s impression is a modest one. Although settled in the latter half of the 12th century, and boasting a moated castle on the Otava River built shortly thereafter, the large-scale urban reconstruction of the 1970s demolished many of the historical buildings that had given Strakonice the fairy-tale quality typical of many old Czech towns.

Today, chopped up by industry, Strakonice gives off an odd atmosphere. For most people, the town brings to mind the character Švanda dudák (Švanda the Bagpiper) from Josef Kajetán Tyl’s play Strakonický dudák anebo Hody divých žen (The Bagpiper of Strakonice or the Feasts of Wild Women). Although some Strakonice natives may find the connection between the character and their town positive or at least amusing, for others it has become a burden.

Indeed, it was this character that inspired the formation of the group “Oživme si Strakonice” (Let’s Revive Strakonice) back in 2012 when several statues of the character were placed variously around the town. These “silly” statues, according to Jan Freiberg, a founding member of Oživme si Strakonice and a Strakonice native, sparked debates about “… the use of public space in a small town where symbolic sculptures from the 19th century are often used, leaving no room for new ways to grasp public space.” This debate in turn made Freiberg realize that the problem “… ran deeper and was related to the entire community being incapable of handling its history or future.” Motivated to explore the topic further, Freiberg invited Soňa Nováková and Aneta Brejchová, two students of art history, to form the core of the group.

Engaging and Questioning the City: Workshops and Lectures

For their events, Oživme si Strakonice chose places and themes related to sites in the town that had become neglected. By choosing such places, the group hoped to bring public attention to them, to start a discussion on what their abandonment or neglect said about the town itself. Freiberg claims their “… leitmotif was that the image of the city reflects the thinking of the community. We didn’t want to change just the houses, architecture or statues in the streets, but primarily the thinking.” The group focused on old textile factories and the Johannite Commandery located in the castle complex. Both of these, according to Freiberg, were falling apart. For Oživme si Strakonice this begged the question: “Why can’t the city handle the valuable pieces of its history, instead presenting itself through objects of little value?”

To answer this question, Oživme si Strakonice organized workshops for the public. Karel Skalický, the head of the Municipal Museum in Volyně, presented a lecture about textiles and the Johannite Commandery. In addition, the reporter Václav Koblenc taught people how to get information about the current status of a building, whom to ask and how to make sure sources are reliable. Meanwhile, Oživme si Strakonice turned its attention to a complex of former textile factories, architecture tied to “… the modern history of Strakonice which significantly shapes its present form.” Together, along with the architect Dušan Řezáč and a group of mostly young architects, the group created a project in which they designed a new form and use for the functionalist building Fezka Na Dubovci.

The artist Roman Štětina also took part in the initiatives of Oživme si Strakonice, giving an audio and video workshop meant to teach young people the basics of reporting, while being thematically focused on the local oral history of the former textile factories. Curator Jiři Ptáček introduced participants to what it means to intervene in the public space, asking whether it is better to have a statue in the town square or a living person. During this workshop participants engaged with the city, “… playing in it and asking about its history while imagining situations that could happen or should happen.”

Another big event organized by Oživme si Strakonice was a week-long visit by students from the Multimedia Studio of the current rector of the Academy of Fine Arts, Tomáš Vaněk. During this time, students sought out the history of a public place while reflecting on the function of that space and its future. Additionally, in 2013, Oživme si Strakonice collaborated with the Prague gallery Ferdinand Baumann, creating a special extension of the gallery’s annual performance festival. The festival, at that time concerned with the topic of food and entitled “3D Superfood,” took place over two days in Prague, and again for one afternoon in front of the Kaufland megastore in Strakonice.

The Johannite Commandery became the focus of Oživme si Strakonice’s efforts in 2013, when the Order of Maltese Knights, to whom the space belongs, was considering selling it. This sacred space, once a destination of pilgrimage and the location of rare frescoes (in desperate need of renovation), had lost much of its public significance in recent times. In addition to Christmas and Easter festivities, the commandery was often rented out for various private events, from weddings to high school gatherings. Between these events it was rented by the regional museum and used as storage, undermining not only the frescoes’ beauty, but also the space’s original sacral atmosphere.

To recover this historical building and its frescoes, making them again part of the town’s idea of itself, became Oživme si Strakonice’s mission, resulting in a series of workshops on architecture, which took place in the autumn and winter of 2013, in which the public was invited to learn about medieval art and how to better understand it. The art historian Hynek Látal was the series’ first lecturer. Architects Petr Lešek and Dušan Řezáč also participated in the series.

In 2014, Nováková, a Strakonice native herself, decided to go a step further and introduce a “… site-specific project of contemporary art in the sacral space of the Johannite Commandry.” The commandery includes three spaces: an ambit, a hall, and a church. The first “intervention” in the space, which happened in October of 2014, took the ambit and hall’s original uses into consideration. Visitors gathered in the hall, just as the brothers of the Order of St. John had, to watch a performance by Matěj Frank. Similarly, in the ambit, visitors were met with an intervention by Petra Lacinová, which offered a different perspective on “… the medieval monument itself as well as the experience of the spiritual atmosphere of the space.” The event was received with enthusiasm by no only the local public, but also by artists working and living outside of the southern Czech Republic. Nováková notes, “Because there is a lack of cultural events on offer, locals are grateful for any kind of cultural activity that gets them out of their homes. Since site-specific projects carry educational functions as well, I try to invite as wide a spectrum of locals as possible. Consequentially, the events have been visited by people of all ages and from contrasting educational backgrounds.”

Doing it Yourself, Seeing Where it Leads

“Today Oživme si Strakonice is in a period of hibernation,” says Freiberg. In spite of this, Oživme si Strakonice has inspired the formation of another group called “Jsme Strakonice” (We are Strakonice). The two groups have worked together from the beginning and continue to communicate whenever one of the members of Oživme si Strakonice has an idea for their hometown. In addition, Freiberg runs the cheekily named gallery “Na Shledanou,” located in the neighboring town of Volyně in the local cemetery, keeping in touch with his roots and connecting the artistic community with the local one. The efforts of Ožvime si Strakonice have also had another result: The town has purchased the functionalist textile factory complex from its bankrupt owner and is turning it into a technology center.

Oživme si Strakonice’s name is telling: Oživit means to revive, and to the verb is added the reflexive si, underlining the personal effort required for the town’s revival. Indeed, the group’s efforts demonstrate a desire to take control by creating different possibilities for a public wishing to experience their city, seemingly lackluster and devoid of events tying together historical elements with contemporary and alternative culture. Oživme si Strakonice’s name is clear: if you want a revival, you need to do it yourself, and who knows what the actions you undertake will lead to? 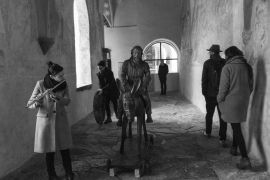 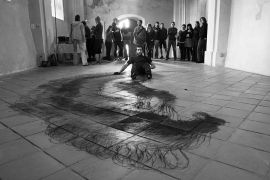 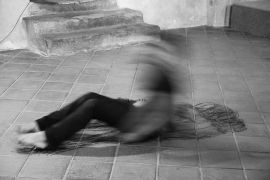 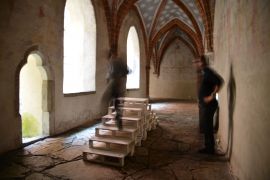 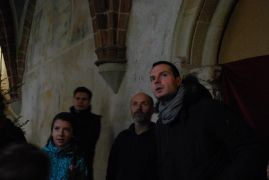