Future of the Past

As in a few other European countries in recent years, politics in Macedonia have been carried out on the visual and symbolic plane. Making their political visions visible in public was one of the highest priorities to the former, nationalistic government, which extensively rebuilt public space, covering it with historicized sculptures, monuments and new decorative buildings, and striving to reframe Macedonian history and creating a new memory.

This new memory, based on an imagined past, is the result of a political crisis, in which a society’s future development has lost its promise, and the past is imagined as more secure and comfortable. Macedonia's historicized architecture is a testimony to an anxiety about the future, the fear of obsolescence and constitutes a crisis of representation.

However, the government's radical visual program also spawned resistance in the civil society, which gradually built up from small protests against the new political vision and culminated in what is now remembered as the “Colorful Revolution” — a series of anti-governmental protests that eventually resulted in the 2017 change of government. This lecture will touch on trends of historicization of the present in Europe and attempt to show how the politics of memory in the Macedonian case influenced processes of change and emancipation in the spheres of civil society and arts. It will on focus on the Macedonian contemporary art production of the past 10 years, and present practices that used a mixture of artistic strategies combined with political action for questioning and confronting state power.

Elena Veljanovska (b.1979, Skopje) is a freelance curator and cultural producer. She studied Art History and Archaeology in Skopje. Veljanovska has been writing on art, initiating events, cultural projects and exhibitions since 2003, and ever since she became part of several non-profit organizations, as well as a co-founder and artistic director of the platform for new media art and technology Line I+M (2006 – 2012). She was actively involved in shaping the Association for the Independent cultural scene –Jadro from Macedonia (2009-2017). Since 2012, she has been the executive director and programme curator in the organization Kontrapunkt from Skopje. In 2016, together with Iskra Geshoska from Kontrapunkt, she has developed CRIC-Festival for critical culture, which takes place in Skopje, Macedonia. The aim of the festival is to bring together participants from various fields of interests, like philosophers, sociologists, art and cultural theorists, artists etc., in order to create space for an exchange of critical thought and learning, as well as to experiment in establishing collaborative production.

The event is free and will be held in English
It is organized in tandem with the Diffractions Collective. 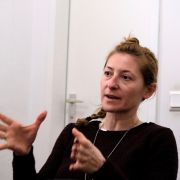