Industrial Heritage in the Sphere of Cultural Production

In 2010, textile workers of Kamensko went on strike in the city centre of Zagreb. It was one of the rare cases where textile workers occupied the public space and were supported by many civil organizations, attracting a great deal of media and public attention. Despite the community pressure, the factory was closed down, leaving the textile workers on the street without ensuring them previously earned salaries.

This is just one of many examples underlying the present state of the almost completely destroyed and abandoned industrial sector. The shift from industrial to post-industrial has also signified the transition from socialist to post-socialist society. This process is characterized by the murky privatizations of state-owned socialist factories, their subsequent destruction; and for citizens, primarily industrial workers, this also meant severe deprivation of basic rights and the means of proactive engagement with the present and the future (Petrovic 2013).

I approach industrial heritage as a form of intangible cultural heritage which covers a wide range of practices, representations, expressions, knowledge, skills that communities or individuals practice and recognize as part of their cultural heritage, transmitting it from generation to generation. I am also interested in uncovering parallel and non-official historical narratives of the industrial spaces, particularly concerning the workers' experiences of factory, labour conditions and everyday life. In this context I specifically stress the gender component of industrial labour and its relation to female emancipation and empowerment (as a result of economic changes that emerged after WW2, in the period of early socialism). Furthermore, I want to discuss the institutionalization of socialist industrial labour and tourism’s role in commodification of industrial heritage.

Lea Vene is an art historian and cultural anthropologist. In her research in the field of visual art and anthropology, Vene constantly rethinks the role of visual media in translating elements of culture and everyday life through documentary film and photography.

For example, she examines image/visual ethics, self-reflexive practices in film making, sensory ethnography, the politics of representation, the relationship between “us” and “them,” advocacy in visual research, participatory and community art practices, and the negotiation of the marginal positions in the visual research.

Vene works as a curator in the gallery Miroslav Kraljević. She’s one of the organizers of ETNOFILm (Ethnographic film festival) and curator at ORGAN VIDA — International photography festival. She is an active member of the association grey) (area space for contemporary and media art. She is also a teaching assistant at Faculty of Textile Technology in Zagreb.

Lea Vene is also involved in ZMAG (Green Network of Activist Groups) and GMK (Gallery Miroslav Kraljević) that promote the interaction between artistic research and permacultural practices as a model for creating sustainable, flexible and productive cultures through the observation of natural systems. Three basic ethical principles are employed: care for people, care for the land and earth and the just distribution of goods. DIY principles and direct action are inscribed at the core of the permacultural way of thinking. Once a year they organize a thematic residency for an artist/artist collective, with topics so far ranging from alternative approaches to the production and processing of food based on renewable energy resources to DIY philosophy and ecological seed production.

Another project in which Lea Vene participates is Industrial heritage of the Island of Korčula, an inclusive collaborative platform encompassing scientific and artistic research which brings together the interdisciplinary approaches of cultural anthropologists, ethnologists, curators, artists, conservators, archivists and other experts. It also involves the local community, institutions, associations and initiatives. During the last century the Island of Korčula has based its production and economy to large extent on its well-developed industry: shipbuilding, assembling, fishing and package processing, textiles, paint, adhesives, varnishes, electronic devices, etc. 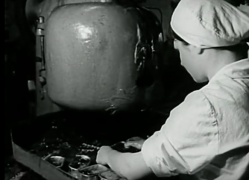