Félix Blume, French artist and sound engineer, will personally introduce his latest film Curupira, creature of the woods, which will be screened together with a film by Adrien Lecouturier Fiebres, to which Blume contributed sound recordings.

You can find curupira deep in the heart of the Amazon, where Tauary natives invite us to listen to the sounds of the jungle, the birds, and animals. However, some weird sounds appear: a creature prowling around the trees. Some have heard her, very few have ever seen her, and those who did find her never came back. She charms, she enchants — she leads people to get lost: each of one of them tells a story in their own way and tries to understand her sounds. Curupira, creature of the woods takes us in search of this being: a reflection about myths and their place in the contemporary world. It’s a sound thriller in the midst of the jungle.

Three men advance through a noise-filled forest, surrounded by tapirs, nutria and toucans: on the high Amazonian plateaus, Pierre, a Franco-Venezuelan doctor, travels from camp to camp to treat the gold and diamond diggers. Trained as a director of photography, Adrien Lecouturier gives each sequence a unity, a nugget patiently extracted from the friable block of filming that one imagines is physically trying. Although the fight against malaria calls for systematic disinfection of the camps, Pierre’s consultations are essentially face-to-face talks about physical and mental cracks, dependency on alcohol or on the “stone”. Getting the locals, who are men of few words, to open up seemed an impossible feat, but he lives in the region and we can hear in his discreet questions that an inseparable link ties him to his patients. “In the depths of the miners’eyes, Pierre finds a spark that he has known well”, writes Lecouturier in his director’s statement. “His father was a gold digger, a miner like many of the locals, before marrying an Indian woman from the Apure lowlands, having a son and returning to Europe thanks to his pot of gold and diamonds”.

Félix Blume currently lives and works in both Mexico and France. His work is focused on listening, and it invites us to live sonic experiences that bring about a different perception of the surroundings. He often works collaboratively with communities, using the public space as a context within which he explores and presents his works. He is interested in myths and interpretations, in human dialogue in both inhabited natural and urban contexts, and in what voices can say, going beyond words.

Blume’s sound works have been broadcast on the radio around the world and exhibited in places such as the Centre Pompidou and the Musée d’Orsay (Paris). He was awarded the Soundscape prize for his last video work Curupira, creature of the woods and the Pierre Schaeffer prize for his work Los Gritos de México at Phonurgia Nova. 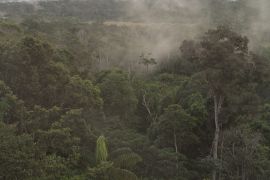