Unfortunately, we can't control the weather. So because the sun did not shine over Liepaja on Monday, we are postponing the event to Sunday 5 July.

We cordially invite you to attend the performance and live stream on Paula Vitola’s youtube channel as part of her Agosto Foundation artist residency.

On the coast of Venta in Ventspils, Vitola puts together a configuration of solar-powered sound sensors and objects. The artist herself and the sun become the main performers. She follows the sun as it moves around, changing the position of the shadows.

The sound from the process is generated using photoacoustic principles: the formation of sound waves in accordance with the absorption of light by a material sample. In order to obtain the effect, the light intensity must vary, either periodically (modulated light) or as a single flash (pulsed light).  The discovery of the photoacoustic effect was made in 1880 by Alexander Graham Bell, who built the first electronic wireless communication system: the photophone.

Bell’s discovery was one of my main inspirations both conceptually and technically. The sun is very tricky to work with if you are trying to build something practical using the sunlight itself, because not only can you never know how the weather will change, but also as it changes its angle depending on the time of the day and year. At the same time, it makes me think about how we have gained our “independence” from the sun by inventing electric light and other electronic devices, so that we take the sun for granted. Before those things have existed, the sun was used as a clock, and the first calendars were based on the movement of the sun and solstices.

The technical setup consists of sensors and a solar panel that absorbs the energy from the sun and “sees” the slight differences in the light as it changes, and which we are not able to perceive. Subtle changes in the spectrum of light are responsible for the frequencies we hear. The solar panel can be used as an analog input device for any audio interface. Three main techniques are used for generating the sound. Modified DC motors are used during the performance as physical controllers, changing the frequencies of the sound, where they are placed in the environment to be moved freely by the wind. The second technique is based on feedback. A speaker moves a string and the shadow of the string creates a sound that comes out of the speaker. The third technique involves the nearby river: sound is created by the reflections of the moving water.

Paula Vitola is a Latvian intermedia artist based in Riga and Liepāja, who is mainly interested in art as research, art and science and media archeology. More about the artist here. 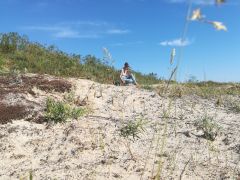 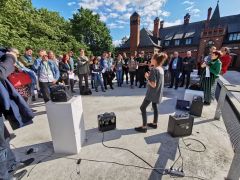 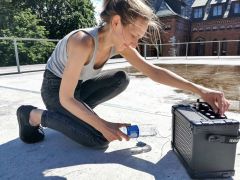