New Life for an Abandoned Church

Soulkostel isn’t easy to find, even with GPS. You must go all the way through Vernéřovice and, almost at the end, turn off onto a grassy lane.

Luckily, at the turnoff, we are directed by Hans Brusse, one of the owners, who is just then leaving on a musical tour of the Czech Republic. Marjolijn de Graaf is already waiting for us in front of the church. They arrived a few days before with their children on vacation, taking advantage of the last few sunny days of October.

The Dutch couple stumbled across this half-ruined church in the middle of the forest about 15 years ago. They say that, at that moment, a real estate agent wandered in. The main reason they decided to settle here was because Hans “had been looking for a place where he could make loud music without bothering anyone. Holland is so expensive and full of people that we gradually widened our search radius and finally said, OK, it has to be about 1000 kilometers away.” At the same time, Broumovsko has in recent years become a favorite cottage holiday destination for the Dutch.

The church, built in the late 19th century, was already dilapidated at the end of World War II, with no roof, and its rehabilitation took about 8 years. They left the few surviving fittings in place, and re-used most of the original materials. They completed the church with a wooden structure — the first floor is for concerts and other public events, while the second, almost at the highest point in the roof, is private space. “We re-use material, though the floor is of course new, since it has to be firm. Some things have been acquired, like this pew. Hans especially likes things from the 70s, old furniture. Sometimes we buy something new. But it is nice to give old things a new life. We are slowly putting together all the concert equipment, a sound system and lights, but even these things we buy second-hand or we acquire them somehow.”

The church and its surroundings are quiet in the autumn, even a bit deserted, and it’s hard to believe that in the past a local spring associated with St. Mary was a well-known pilgrimmage site. Stations of the Cross with little chapels and pictures of the Virgin Mary and the saints were a draw for thousands of pilgrims. There was even a coffee house here, which nowadays, like the row of cottages, serves the scouts from Náchod who come every summer to set up camp.

Meanwhile, Hans as a musician is interested above all in organizing concerts — the list of bands who have already appeared there is indeed long — Marjolijn concentrates on yoga, tai-chi, mediation, chanting mantras, and the like. When their children were small, until the age of five, they lived permanently in the church in Vernéřovice, but to make a living, they have had to return to the Netherlands, where Marjolijn teaches in an elementary school. They explain that they would like, in the future, to have a more flexible work life. It is difficult to take care of a house when you are there only for vacations.

Luckily, they have locals helping them to organize events. For the past several summers, they have hosted symposia joining together Czech and Polish artists, who try to get the local inhabitants and surroundings involved in various ways. The people of Venéřovice and all around have learned to go there, and sometimes they even play there. “For me, it is very special here, because in Holland we live in a city, we know people there, but it is not a community like it is here.” To the question of whether it feels strange at all to live in a church, Marjolijn says that she believes that, to a certain extent, their activities restore the functions of the erstwhile church — celebrating, coming together, and supporting the local community. 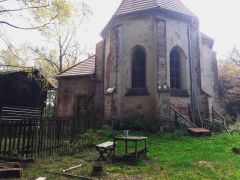 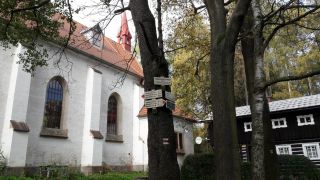 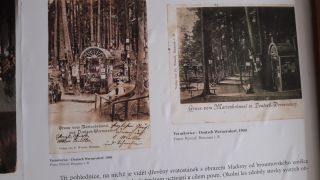 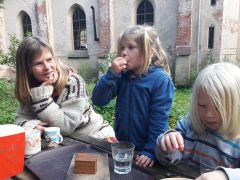