Peter Sinclair is a sound artist and researcher in audio art. He began his career as an artist building musical machines that he presented in exhibitions and on stage, either solo or in collaboration with other musicians. In the early 1990s he adopted computer programming as an artistic tool while maintaining a strong attachment to “physical” space in his projects. He quickly developed shared networking practices, notably with the New York artist G.H. Hovagimyan, with whom he collaborated for more than a decade and with other experimental groups such as DaisyChain and PacJap.

Sinclair has exhibited and performed frequently in Europe and the United States, in places such as the Exploratorium, San Francisco; MAC, Lyon; the Postmasters Gallery, New York; Belfort Interference Festival; Eyebeam-Beta Launch, New York; Festival Cinema and New Media, Split; ISEA, Nagoya; STEIM, Amsterdam; La Gaîté Lyrique, Paris; among others. His work today focuses on the real-time sonication of data, mobile audio and the artistic development of new auditoriums. For the most part, Sinclair develops this work within the research unit Locus Sonus, which he directs.

The Locus Sonus unit conducts experimental creative research in audio art and is based at the art academy of Aix en Provence (ESA-Aix) and financed by the French Ministry of Culture and Communications. Locus Sonus is currently in the process of integrating the new mixed multidisciplinary research unit PRISM (Perception, Realization, Image, Sound, Music)-Aix Marseille University, CNRS. Sinclair is an associated researcher and member of the scientific council of PRISM, and was a member of the project steering group.

Sinclair obtained his DNSEP (M.A.) at the Ecole Supérieur d’Art in Nîmes in 1985, and his Ph.D., entitled Using Real-Time Data Flux In Art: The Mediation Of A Situation As It Unfolds; RoadMusic: An Experimental Case Study at UAL (University of Arts London) in 2013.

Personal website
Locus sonus
Symposium 6: Sonification (what, where, how, why) 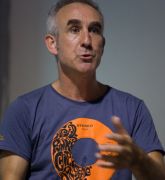 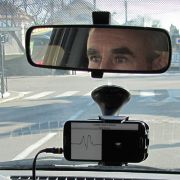